Round 5 of the FPL Cup saw 20 FFUKers remaining, a mere 9% of our number still contesting the prize. Working back from the decay rates we’d seen over previous rounds it was expected that 12 of those 20 would progress …. And this is exactly what happened.

Eight FFUKers fell at this the 6th hurdle (including the qualifying round): Paul Reid, Joe Pizans, Dean Collins, David Lambert, Matt Frost, Ben Carter, Andy Caulfield and James Ollier. The heaviest defeat was suffered by Paul Reid, losing by a whopping 32 points (40-72) to Andre Kinchelskis* whose triumvirate of Spurs players (Kane (c), Eriksen and Tripper) did most of the damage. Andy Caulfield can count himself the unluckiest achieving the highest points of those ejected (57) which would have been enough to win 11 of the 20 fixtures the FFUKers contested.

Perhaps even more unlucky was the one player who drew his fifth-round encounter, David Lambert. His 48 points was probably sub-par, but he matched his opponent losing by virtue of his team scoring only two goals to his opponent’s 3, doubly galling given his team conceded one goal fewer.

So, 12 FFUKers progressed, representing just 5% of our number. The biggest win was recorded by Olly Wimshurst – a solid 20-point win. Olly is flying at the moment having started the FPL Cup in 101st in the FFUK league, now up to 48th. With Dean Collins’ exit the highest ranked FFUKer still in the competition is Stuart Newton, ranked 26th. Stu’s bang average 55 points was enough to see off Behairy FC, a ghost team that hadn’t made a transfer since GW4 (but still had Salah (c) and Kane to cause potential trouble).

James Amar is the next highest ranked FFUKer still in the FPL Cup. Ranked 36th James saw a team with a name in Arabic script that I can neither read nor even make a stab at pronouncing. It was a very good win given his opponent scored 69 points. James though managed 79, the highest score from the 20 FFUKers contesting Round 5, Son, Rashford and Kane (c) doing the bulk of the damage. The luckiest among our number was undoubtedly Jamie Allaway. Jamie scored just 41 points in GW 21, Round 5, a score that would have progressed in just two of the 20 ties. Fortunately one of those two was his opponent ManuVolBucs, a ghost team with just two transfers all season (aside from his wildcard) but which had scored a huge 92 points in the previous round.

The lowest ranked FFUKer still standing is now Stephen Fielden (129th). Stephen defeated Lotmer United 52-37. Yours truly also managed a win, taking down ghost team poorbrian’salt 75-60.  My opponent in Round 6 though looks much more dangerous. With 26 transfers this season to date and ranked 49,427th overall, Moves Like Jaggers will be a tough nut to crack with Salah, Son, Aubameyang and Hazard all in his line-up while not being in mine. I may need to make some tactical transfers to cover at least one of those four.

Finally, a complete run-down of the 12 remaining FFUKers in the FPL Cup, in order of FPL rank: 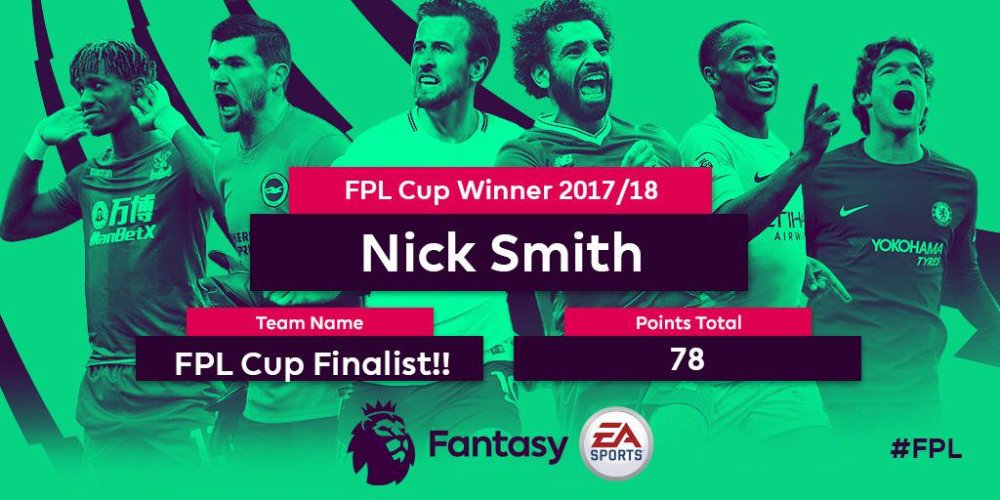 View all posts by Paul Baker