After Sergio Aguero’s five goal rout and subsequent injury there was some major rebuilding to do in many squads this week. The inevitable transfer hits were taken by quite a few in the league including many on page one of the leaderboard.

So now that the dust has settled on GW9 how did you fare? Who did you replace Aguero with? And more importantly, did you make it to page one? 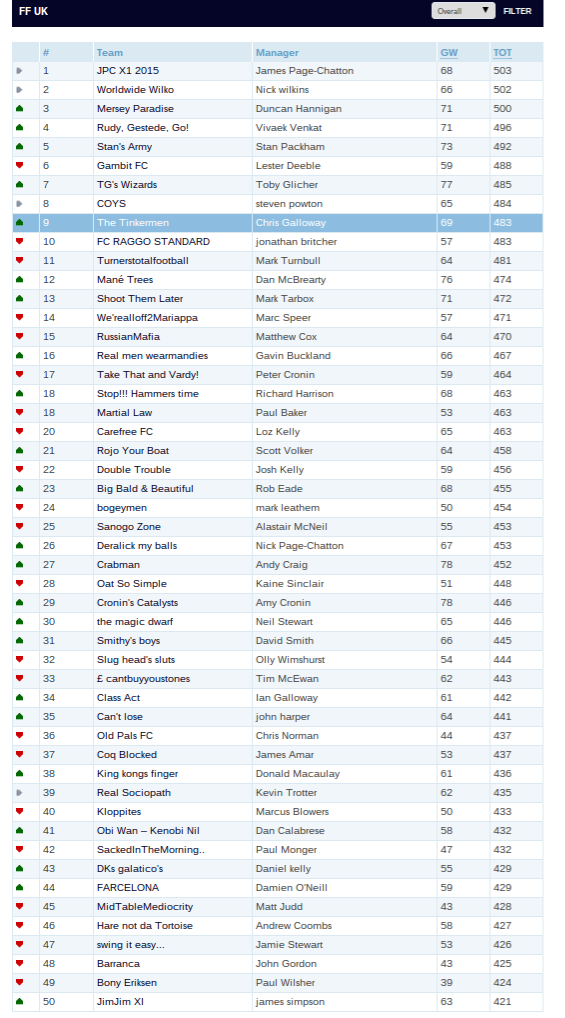 James Page Chatton (1st) remains at the summit, but only just, and despite his 8 point hit. His 68 points this week was a solid score and James will be thankful to his double Liverpool defence, Sanchez captain and also Jamie Vardy (who continues to make a mockery of his price tag). That aside, James may regret bringing in Daniel Sturridge for Aguero as he succumbed to yet another injury in training and did not play.

Hot on his heels, just a point behind is Nick Wilkins (2nd). Last week’s top scorer (who still needs to claim his score) racked up a decent 66 points thanks to KDB, Vardy and Sanchez as well as a few clean sheets at the back. Arguably though, it was his choice of Costa as Aguero’s replacement that was most eye-catching.

Duncan Hannigan (3rd) is closing in on top spot too with 71 points this week. He picked up 4 out of 5 clean sheets for his defence and had a lot of the other usual suspects. This was a theme this week. In fact there were 7 Premier League teams with clean sheets this weekend compared to 2 and 3 in GW7 & GW8 respectively; therefore clean sheet points were definitely easier to come by this week.

Completing the top 5 are Vivaek Venkat (4th), he brought in Bony to replace Aguero (which looks a very wise move at this stage), and Stan Packham (5th), who has surged up the leaderboard in recent weeks. This week Stan can thank a clean sweep of clean sheets for all of his defenders plus his keeper. He also had Sanchez as captain too which didn’t hurt.

Lester Deeble (6th) dropped in the league as his captain choice of Walcott didn’t pay off so well. On top of this, his beloved Watford were humbled at home by Arsenal. Better luck next week Lester.

Toby Glicher (7th), Steven Powton (8th) and myself (9th) are all safely in the top 10. Jonathan Britcher (10th) was one of the few who kept Aguero in and didn’t take a hit. Resting Aguero on the bench, Jonathan relied on KDB and Vardy to get his points. Will he take out Kun this week though? And if so who for?

Currently, it is pretty tight at the top with just 20 points between 1st and 10th place.

In fact, my statistical assistant informs me there really were a lot of transfer hits this week, 55 hits on page one and 96 in total in the FFUK league. That is a lot of hits. Some will have worked, some won’t. There is no right and wrong in this game, is there? Maybe the relevant phrase is ‘there is more than one way to skin a cat’!?!? Either way.

Andy Craig (26th) joint top scored with 78 points this week. Andy didn’t take a hit, and triple captained KDB (who did ok) along with having Vardy and Cabaye. Plus he also achieved a clean sweep of clean sheets in defence (try saying that after a couple of pints).

Amy Cronin (28th) also top scored with 78, she also didn’t take a hit but captained Super Jamie Vardy who was ably assisted by Costa. Amy is clearly the one with the Fantasy know-how in her family, maybe she could teach her brothers a few tricks?

James Simpson (50th) sneaks onto page one of the leaderboard thanks to his Alexis captain pick with Vardy and Cabaye sufficiently boosting his GW score.

So that’s your GW roundup. How was it for you? Did anyone have Wijnaldum for his 4 goal haul (he actually scored as many points as Aguero last week by virtue of the fact that he is a midfielder and gets an extra point per goal.) Worse still did anyone take Wijnaldum out recently and miss out? Sounds like a Fantasy Nightmare – please let us know.

It was never going to be as exciting this week after the fireworks of GW8. But then again, who knows what’s in store for us this weekend?

The fun never stops for Fantasy Managers (apart from in International breaks.)