There is only 1 place to start this week. Super Jamie Vardy made a mockery of his price tag by scoring again this weekend for the 11th consecutive premier league game, an all time (PL) record. He is currently enjoying a run of form that most strikers can only dream of and at the same time he is every fantasy managers dream right now and one less player for us to worry about. Instead of asking if the former Stocksbridge Park Steels player can score again next week maybe we should ask when will he stop scoring? 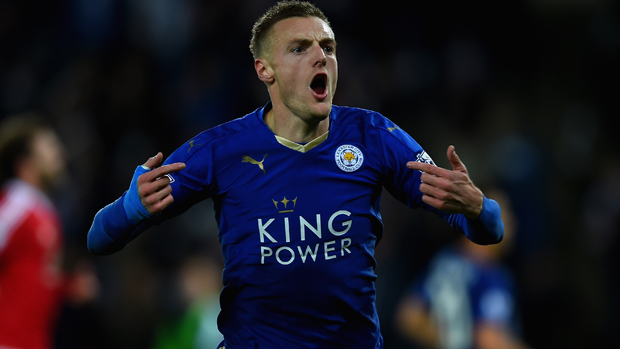 At the back clean sheets were again at a premium with only 4 teams (Chelsea, Spurs, Liverpool & Sunderland) managing shut outs. Of those the highest scorers were a couple of potential bargain bin buys in PVA & Yedlin. More popular picks of Moreno & Alderweireld, also scored well after both receving the maximum bonus in tandem with their clean sheet.

In midfield KDB returned to form with 1 goal, 2 assists and the inevitable maximum bonus meaning he was the GW’s highest points scorer. A welcome return after a few lean games for fantasy managers who have kept faith with him, unless you took him out this week? Also scoring big were the Crystal Palace pair of Bolasie & Macarthur, netting 15 and 14 points respectively in their demolition of Newcastle. The strong form of both Barkley and Ozil also shows no sign of letting up as they both got into double figures once again.

Up front, alongside Vardy, it was the Watford pair of Ighalo & Deeney who showed the premium strikers how its done, they both managed a goal & an assist each against a hapless Aston Villa side and both received max bonus. Who needs Costa, Aguero & Sturridge when these 3 are on fire?

How does this all affect the FFUK league you ask, well we have a new leader for a start. See below for the latest league table & GW review. 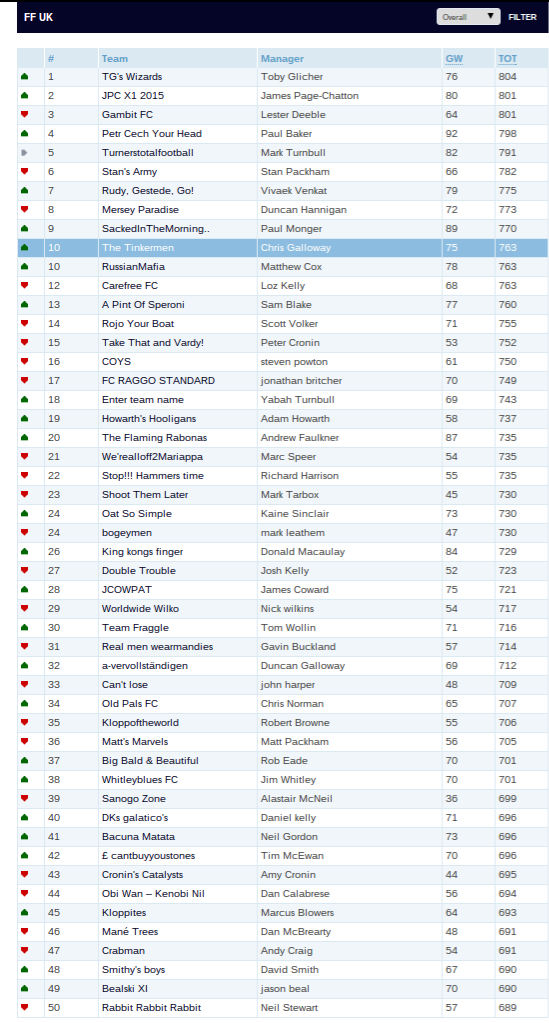 Congratulations to Toby Glicher (1st) who currently sits at the top of the table. Toby was away in Hong Kong  this weekend but must have enjoyed his teams’ performance. TG’s Wizards managed 76 points in a high scoring week thanks to Lukaku (c), Vardy, KDB & Barkley along with defensive reinforcements from Toby & Kolarov. As an Emirates season ticket holder it is surprising to see that Toby doesnt have any Arsenal players (other than Cech) in his side, does he know something we dont? Or is he just saving himself from having to remove them once they get injured a la Sanchez this week.

James Page Chatton (2nd) moves back towards the top of the league with 80 points whilst Lester Deeble (3rd) had a less successful week, he lost top spot only managing 64 points which wasnt enough to keep the chasing pack at bay. He got rid of KDB for Barkley which could have worked out worse but wasnt ideal, then compounded it by bringing in Coutinho for a hit, who missed the game due to injury,for Anya. Is this just a tempory blip or has the pressure got to Lester? The next few GWs will go some way to answering this.

Its getting tighter at the top now, plenty of teams in and around vying for supremacy. Paul Baker (4th) is in red hot form and is the top GW scorer with 92 points, The usual suspects of Lukaku (c), Barkley, Ozil & Vardy along with Ighalo, KDB & Kolarov were responsible for the bulk of his points. Paul also took a hit this week bringing in Lukaku & Firmino for Hoolahan & Pelle which look smart trades. I will be watching Paul’s team very closely this month as we are playing each other in the 2nd round of the FFUK cup. More on that from Pete & I soon.

Paul Monger (9th)  was the best scorer for the month of November with 232 points accrued. The Manchester United fan chose to captain City’s KDB and it paid off handsomely this GW. He was also thankful to his 2 strikers Vardy & Lukaku along with Barkley, Toby & Kolarov.

However not everyone can be rising up the league, spare a thought for our own Pete Cronin (15th) who slips this week with just 53 points and it could have been so much worse had Sanchez & Ozil not come to his rescue in the dying moments of the GW. Pete’s risky decision to get on the Aguero train early hasnt proved quite as successful as he had hoped for. He now has a plethora of other injuries to contend with and at the time of writing has already taken a hit to try and sort out his squad crisis, and is contemplating more as you read this. Added to this he was unceremoniously dumped out of the cup by Mark Turnbull. Desperate times.

Moving swiftly on, Andy Faulkner (20th) continued his recent resurgence and was the joint 2nd best scorer for November with Yabah Turnbull (18th) both achieving 226 points. Not bad considering its Andy’s first season! In fact less than 70 points split the top 20 right now!

Further down Donald Macaulay (26th) had a great week with 84 points thanks to Lukaku (c), Ighalo, KDB, Kola, Toby and of course Vardy!

As we move into December the games come thick & fast, plus there are 2nd round cup ties to think about and challenge cup 1st round match ups still to be drawn. What a time to be alive. Keep checking the website for more news, videos & cup draws very soon!