Welcome to the GW13 REVIEW – RAZZAMATAZZ

After a few weeks away I am now back for the impending frenzy of fantasy football that is coming. Massive thanks to Matt Reid (19th), our Pete Cronin (95th) and Stu Allen (33rd) for taking the reigns recently and providing us all with the closure required to finish a gameweek and prepare ourselves for the next one.

How was GW13 for you FFUKers?

For many of us it was a case of the RAZ and the RAZ NOTS. So get your groove on with this Quincy Jones classic RAZZAMATAZZ! This season’s playlist has been updated, apologies for all the Blur tracks, that was out of my control.

Raheem Sterling (16) is now the top scoring player in the game. He had a good season last time round but looks to have improved again and is arguably now the best English player in the league. His price has increased and Pep has actually rested him for a couple of the easier games this season which makes his top scoring feat even more impressive. Raz is the man right now and if you don’t own him you need to work out just how to get him in. Then the question arises do you need Sergio Aguero (2) as well. What about the other City attacking options? The next few weeks will give us the answers but we need to know now. City are certainly adding the RAZZAMATAZZ this season!

Sterling wasn’t actually the top scorer this week, that award (there is no award) goes to his team-mate Leroy Sane (19) who scored a brace, assist and max bonus against West Ham. David Silva (9) got in on the act too. The one man who didn’t was the one man that many of us trusted with the armband. 76 of us in fact, by far the most popular pick. Olly Wimshurst (125th) went one further and gave Aguero the triple captaincy. Sergio didnt listen and had an off day, he seems to have these away from home with alarming regularity. Questions raised.

Other notable mentions from this week’s Dream Team below include Huddersfield’s Aaron Mooy (16) who single handedly demolished Wolves with a brace of his own and of course the max bonus followed. Is the Australian ace an option for our midfields at just 5.1? How about the Saints’ Stuart Armstrong (14) at the same price?

How about TAA (14) who scored a lovely free kick to reward his owners or Dele Alli (13) who took down Chelsea? Maybe you prefer a bit of Mitrovic (13) who delighted his new manager by dominating the Saints. There are bargains everywhere if you look hard enough. None of Wayne Hennessey (10), Erik Durm (11) or Ciaran Clark (11) will set you back more than 4.5 of your hard earned funds.

Moving swiftly on, lets see how all of this affected the FFUK league: 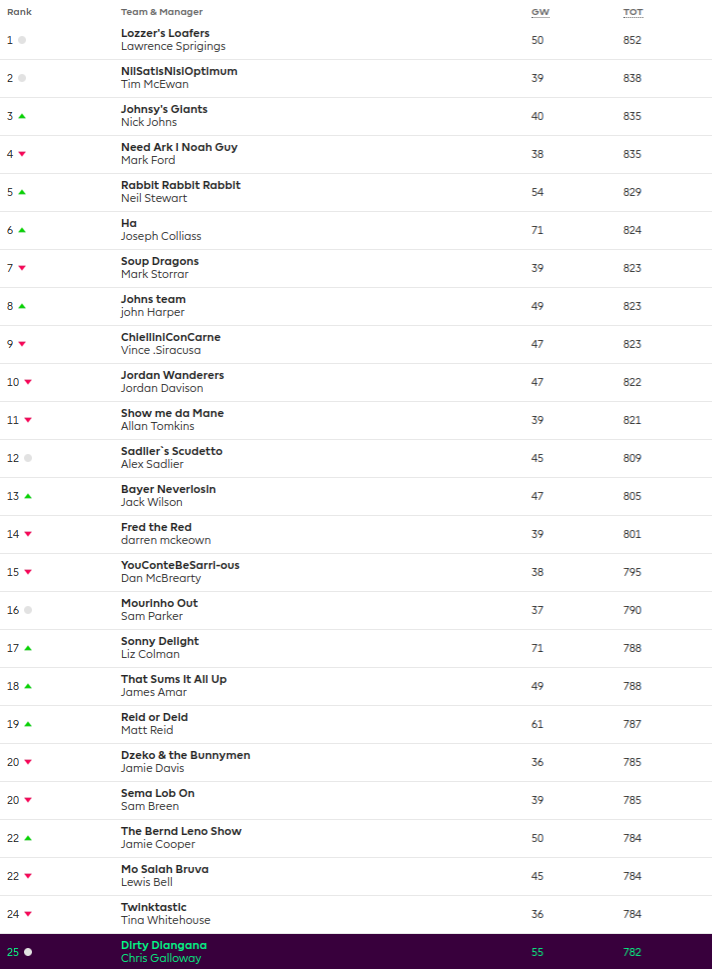 No change at the top. Lawrence Sprigings (1st) and Tim McEwan (2nd) are both held firm but the closing pack are chasing them down. Nick Johns (3rd) moves up a place whilst Mark Ford (4th) goes the other way as the low scorer in the top 10.

However the biggest mover amongst the big boys was Joseph Colliass (7th) with a more than respectable 71 scored. Joseph went with Captain Salah (8 x 2) but of course could rely on points from Raz (16). Whilst TAA (14), Murray (8) and Laporte (6) did the rest.

There are some big names vying for supremacy in the upper echelons of the league this season. No surprise there I guess. There are also some managers exceeding expectations too. No time to take your finger off the pulse. We need all our senses to guide us through what could be a wicked winter. Before all that lets check out who goes this week in the CONTS mini league…

Some weeks are more perilous than others. Sometimes it just looks like it isnt one man’s week. That man this time was Matt Cox who managed just 24 points. Lacazette (0) as his captain pick meant it was important who his vice was. His vice was unfortunatelty the aforementioned Aguero (2 x 2) who did almost nothing. Then he needed the rest of his squad to step up and contribute. They didnt. Only David Silva (9) stood up and now his squad is covered in red flags. I would thrown in a pun here but it feels inappropriate. Matt must be suffering right now. Usually an astute player but his team is now in tatters. Coxey come back, there is still a way to go, you can do it. However you have been removed now from the CONTS mini league. Next week is another double evicition so watch out.

As we go into injury time there are a few things to make you aware of.

Firstly there is plenty of cup news. Check out Pete’s latest CUPDATE for all the latest news including the first round draw for the FFUK CUP and watch out for more news on the culmination of the first round ties in the MILK PLATE. Check out the relevant tabs on this site for all the details. Mark Ford, I am very much looking forward to our tie.

Next up is some disappointing news, because of a lack of numbers the Shaftesbury Charity Quiz has been postponed and with it goes the FFUK Xmas December meet up. This is a shame as Pete and I were looking forward to it and meeting some of the Shaftesbury crew but we have made it our new year’s resolution to get down there in 2019.

Finally its a warning FFUKers, its about to get very busy. There is a feast of fantasy football on the way, no international breaks to scupper us. While we wait for that, take a moment to appreciate all that is good. As we wont have time to register an emotion with the influx of football on the horizon. You can bet that the Razzmatazz goes up a notch now.

As always thanks for reading, look after yourself and each FFUKer.

P.S. Below you can watch the special video from Pete and I recorded late last week, which includes the draw for the first round of the FFUK Cup, and a quick fire quiz for Pete plus our thoughts on the latest happenings.