Welcome to the GW34 REVIEW – UNFORGETTABLE

Was it unforgettable for the right reasons or the wrong ones? This review will attempt to find the answers to questions just like this.

There is a lot to discuss so let’s get to it but not before thanking the voice himself Nat King Cole for his song Unforgettable from way back in 1951, which was way ahead of its time. Who would have thought he was singing about some ffuker captaining Shane Duffy in a dodgy DGW?

First it’s time for the Official FPL Dream Team, how many of these chaps below did you own this week?

Where are all the Brighton players I hear you cry? Good question. Why didnt we load up on Cardiff’s defensive assets not Brightons? Another good question. But we are all about answers here.

The answer is Brighton are ffuking useless and there is no place for useless in the Dream Team.

Player of the week was very likely to be a spurs player but perhaps Lucas Moura (21) wasn’t the one we were all backing. In fact with only 7.4% ownership overall he was very much a differential. After scoring the first ever hatrick in the new Spurs Stadium give yourself a massive ffuking pat on the back if you picked him, Jamie Stewart (13th). 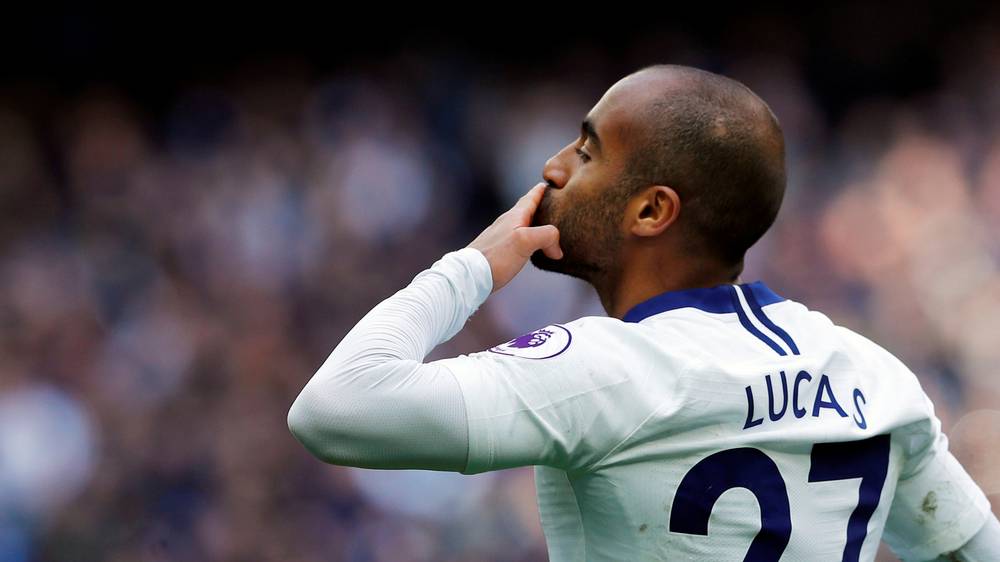 Elsewhere in midfield it was a mixture of differentials, previous favourites and regulars. Pogba (15), Fraser (16), Redmond (15), Babel (14), Wilson (15) and Wood (13) all made this week a bit more unforgettable for the right reasons for their owners.

At the back Cardiff’s Etheridge (9) and Morrison (16) annoyed all of us who had backed Brighton. VVD (12) and Boly (9) made up the rest of the defence.

So how did all that affect the top of the FFUK league? 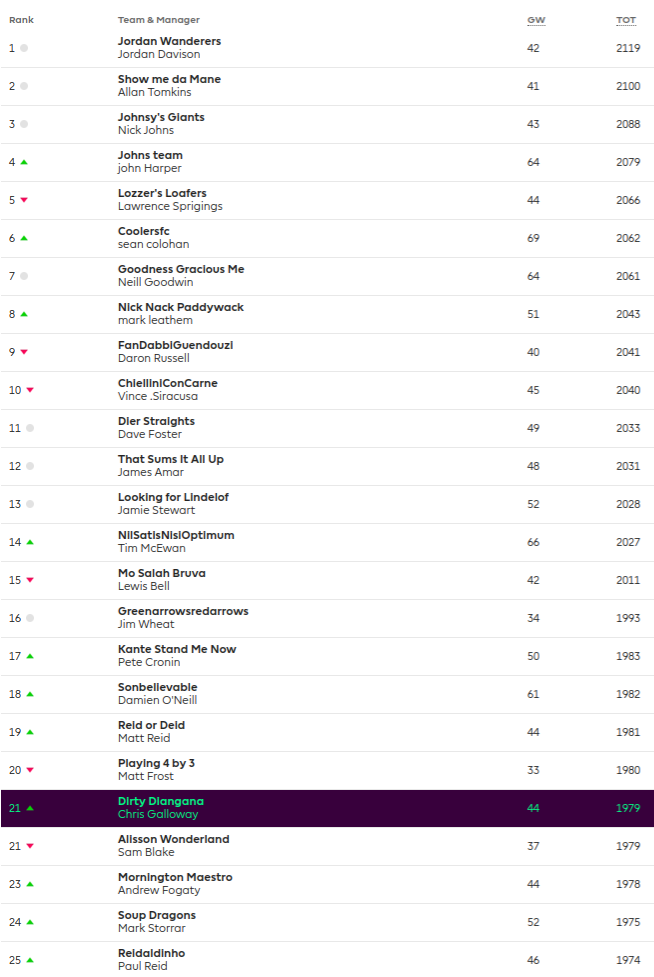 Top of the league is as before. Jordan Davison (1st) must be feeling the pressure now though. A 19 point lead from Allan Tomkins (2nd) is not enough to get comfy or complacent. One slip and he will tumble from that precocious position but he is right where we all want to be.

Watch out for Sean Colohan (6th) who top scored amongst the top boys with 69 points, is there time for Coolers to make a run for the top prize? You bet there is. Always listen to Coolers!

Right behind him is Neill Goodwin (7th) who also scored well with 64 points. Same as John Harper (4th). This kind of scoring will only see them going in one direction.

What do all these big scores in the 60s have in common? None of them used their WC. 25 of the top 50 and 39 FFUKers overall did and in the most we all did pretty poorly. But it was with next week in mind. Wasn’t it? So let’s hope our planning pays off.

Yes 18 FFUKers including Mr Top of the League really did captain Shane Duffy (1) and one nutter even laid down his TC on the Irishman. How are you feeling after that experience Jim Wheat (16th)? I’m sure you wont forget this double in a hurry.

But for the really big scores we have to go further. Much further. So far he had to remind me. But I am delighted to announce that this week’s top scorer with a whopping 95 points is Jake Walker (196th) and that is despite captaining Vardy (2 x 2), fortunately for Jakey the rest of his side didnt let him down in particular Fraser (16), Pogba (15), Sterling (14), Wilson (15), Etheridge (9) and Mane (9) all registering big returns. Unforgettable in such a disastrous week for so many when you get it so right. Congrats mate!

While we have time lets quickly look at the latest scores in the Cups which are both half way through the semi finals. And we all love a semi. Some FFUKers have earnt themselves healthy leads but with this massive double on the horizon nothing is insurmountable. Good luck to all those involved! Pete will be in touch at the end of the month with news of both finals!

With that it is time for an eviction in the CONTS mini league. And its getting down to the nitty gritty now, the prizes are firmly in sight.

In an already emotional gameweek it was bound to be a painful eviction. And so it proved to be for one of my very favourite FFUKers, for all the work he does behind the scenes with the captain and chips stats each and every week. But this game has no favourites. And we all know just how brutal it can be. This week Statto Steve Cronin (29th) managed just 43 points so in the end it wasn’t even close.  Most of us know just how you feel but it must be extra unforgettable because you were so close to the prizes.

What is more Steve was on admin duties so he has to relieve himself of that too. That baton has been passed on to Damien O’Neill (18th) who’s first job was to evict Steve. He accomplished that with style and now must hope he hasn’t been passed a poisoned chalice.

The last 3 each get prize money so only one more eviction in the biggest double of the season next week then we will have our 3 prize winners, then all that remains is to work out who is the King Cont and who is 2nd etc. Who will blink first?

We are nearing the end, but there is one subject on every ffukers lips, or it should be. The FFUK End of Season Do. The plans have been announced. For all the information check the EOS DO post which explains all.

There has been plenty of chat in the WhatsApp group but remember this event is open to all in the FFUK league just let us know if you can make it ASAP.

Next up we will collecting deposits from all those who are in. And sending some reminders to those who should be in but haven’t confirmed yet. Get involved. It will be UNFORGETTABLE. Myself and the Birthday Boy are looking forward to seeing as many of you as possible.

Finally watch out for something very special from the recently evicted Statto Steve on chips remaining in the top 50. Fascinating stuff coming your way very soon!

Strap yourself in for what promises to be an even more UNFORGETTABLE double GW35!

That is all for another thrilling week, thanks as always for reading and remember look after yourself and each FFUKer.