Welcome back to another FFUK season. Welcome to the FFUK family. There’s a WHOLE LOTTA LOVE in the air right now!

Big Thanks to everyone who invited anyone into the league. Without all of you guys none of this would be possible. A big FFUK welcome to all of the new members of which there are over 80 this season. That means more than £800 extra prize money!

What makes FFUK different is our league is entry by invitation only. This has always been the case and it will always be like this in the future. What this means is that everyone in the league knows other managers which hopefully increases the competition (hopefully by the end of the season you will know a few more). The FFUK community has grown significantly and we all have one thing in common, a love for fantasy football and the Premier League.

FYI we are just verifying unclaimed teams but subject to that and all payments being received we are looking at 198 players and therefore a prize pot of £1980! Check the Prizes page for more information.

In these regular reviews we will look back at the Gameweek action in the Premier League before delving into the FFUK league and seeing the movers and shakers on Page 1.

Before we get to the football, just a quick note on Lineker. Legend? Well yeah. And he did present MOTD in his pants, sort of (they looked more like football shorts to us). Anyway, in homage to Lineker, I am writing this in my pants. It’s true! And what’s more, Pete has said that if Chelsea win the league this season, he will do something in his pants too (he didn’t say what exactly but suggestions are welcome).

Now let’s crack on with the first gameweek review of the season.

The Champions were humbled by a decimated, manager-less promoted side, although Mahrez did score a penalty. Has a team ever looked more odds on for relegation? And Hull might be in trouble too 😉

Another of the promoted hopefuls, Boro, will be happy with an opening day point courtesy of a goal from the shoulder of Negredo. But Shaqiri rescued a point for Stoke with a lovely free kick just as he was about to be substituted. Thanks Shaq!

Burnley didn’t get the luck they they perhaps deserved and Sean Dyche’s men succumbed to a late Swansea sucker punch. Does anyone else love hearing the gristly, gravelly voice of the Burnley manager in every post match interview?

West Brom did a Pulis or was it Pulis doing a West Brom? Either way they did a job on Palace. Ben Foster owners were particuarly delighted with 10 points from the England no. 1/2/3/4?

Everton and Spurs played out a 1-1 draw with Barkley and Lamela catching the eye. Southampton and Watford went the same way but with Redmond impressing up front and Capoue, everyone’s favourite 4.5 midfielder, getting a goal to start the season with a bang.

Saturday’s early evening game saw Pep’s Man City square up to Sunderland with Moyes at the helm. Aguero scored an early penalty to the delight of all of us with Kun captain. Defoe equalised before a McNair og won it for City. 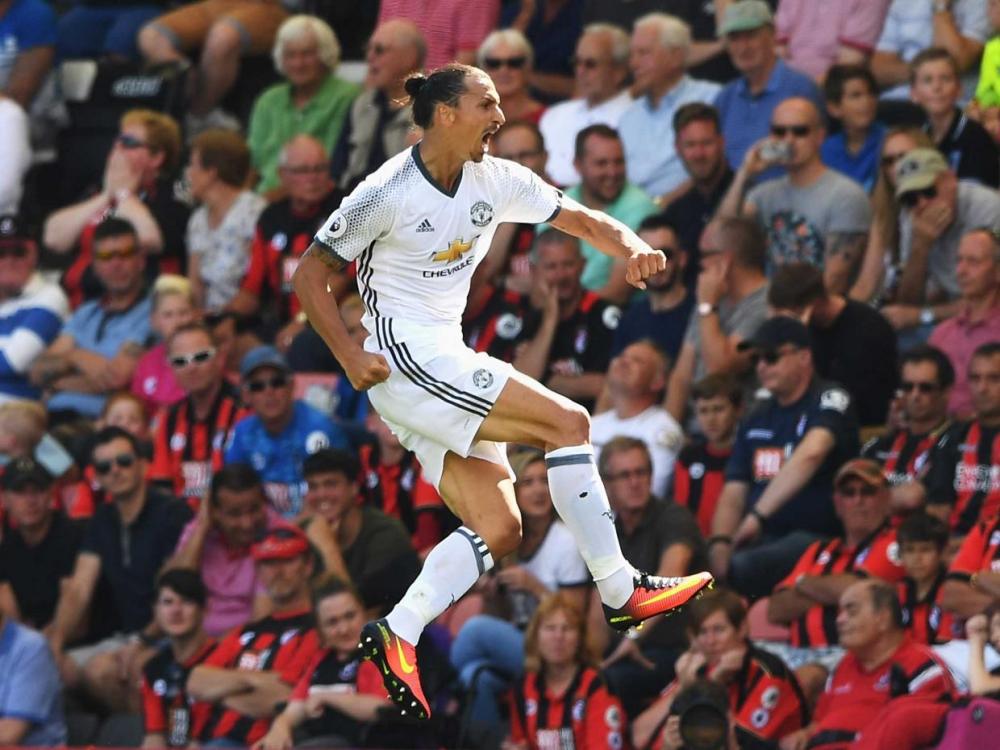 Next up was the game of the weekend. Arsenal hosted Liverpool. The home side started well and went in front, they looked ok for 40 minutes but then they crumbled. The 2nd half was a bit of a goal fest. Liverpool woke up and smashed them for 4 goals from Coutinho (2), Mane and Lallana, sending Arsene’s head spinning in the process. Once the pressure was off the Gunners responded and looked good again. The game finished with a more respectable scoreline – 3-4. Definitely more of the same old questions raised on that side of North London.

Spare a thought for Saints Fans as when watching the game from the Emirates I couldn’t help but notice that what seemed like half the players on the pitch were ex-Southampton!

The first Monday Night Football was a big one (for Chelsea fans). Chelsea looked strong and overpowered West Ham who were unable to get into the game. In the opening moments of the second half, Hazard took penalty responsibilities back from the much-hyped Oscar but this goal was countered by a James Collins half-volley in one of the Hammer’s very few attacks. Costa got the winner but as usual was no stranger to controversy – he could have been sent off about 4 times, and we agree that the new refereeing rules may (will) impact Costa’s pitch time this season. Chelsea are definitely still a work in progress but it was good to see that Hazard looked up for it for about 70 minutes.

Not many clean sheets about. Some of the big boys got going straight away. It was a good week for those who owned the right big boys. Aguero, Zlatan, Mahrez, Hazard and Coutinho were the picks. How many of these, if any, do you own?

For the first time this season let’s go over to Pete at Vicarage Road, for a closer look at what happened on Page 1, the FFUK Top 50. 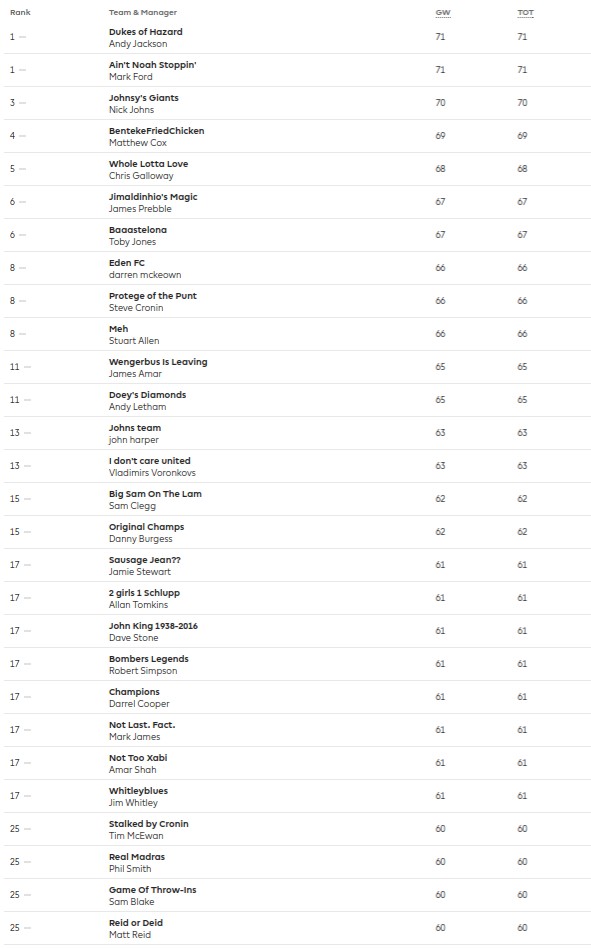 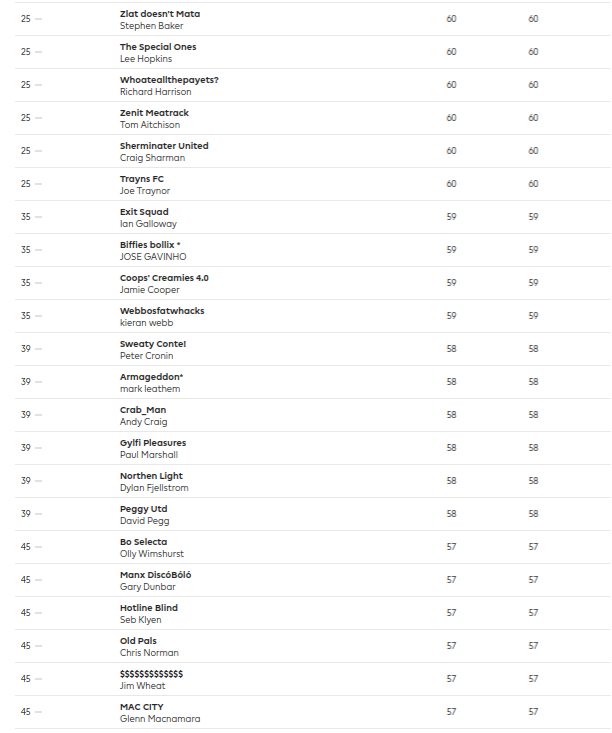 “New season, new players, and 5 of this week’s Top 10 are new to the FFUK league. Amongst the 5 returning players, there are some familiar names, but first let’s have a look at the new boys.

Andy Jackson’s Dukes of Hazard (joint 1st) shares the top spot for gameweek one with 71 points, a fine score. This was ensured by a few solid choices, namely Zlatan (9) and Captain Aguero (9 x2), backed by Hazard (10) and Barkley (10) in midfield. Twists of fate meant that instead of Yaye Toure and Arsenal’s Akpom, Andy had Capoue (10) and Evans (5) coming on off the bench, a bit of rough with the smooth there. Well done Andy!

Mark Ford’s Ain’t Noah Stoppin’ (joint 1st) also hit 71 points, though his points were spread through his squad, which notably includes neither Aguero or Zlatan. In fact, Mark’s Captain choice of Andre Gray fell flat, as the Burnley man failed to capitalise on his PL debut following an explosive pre-season. Instead, Mark’s score is attributable to an excellent midfield of Coutinho (15), Hazard (10), Barkley (10), and Redmond (10), with a peppering of points from Rooney (7), Costa (5), and Azpilicueta (4). Well done Mark!

Completing the Top 3, Nick Johns’ (3rd) 70 points came from a balanced side, and one of the many teams to profit from a stand out display from Ben Foster (10). Nick also gained points from Redmond, Barkley and Hazard, with an Aguero Captain cherry on top.

An interesting tactic of unleashing a chip in the first gameweek means that Toby Jones (6th) Baaastelona nestles in the Top 10. Yes, an Aguero Triple Captain is not a bad return with 27 points, but most will agree, the question is, could this chip have been more useful later in the season? Nevertheless Toby also earned points from Costa, Coutinho and Barkley with a decent total of 67 for the week.

A quick note on Stuart Allen’s Meh (10th). Another to benefit from a Capoue sub in as Fabregas sat out, Stuart’s Zlatan/Aguero combo backed with Redmond and Hazard made for a good week and a solid 66 points.

The more familiar names in the Top 10 include veterans Matthew Cox (4th) and Chris Galloway (5th), along with James Prebble (6th), Darren McKeown (8th) and Steve Cronin (8th) who also had strong starts.

I’m sure no one wants me to pore over the veteran’s teams, in a week where Man City, Man United and Chelsea all got 3 points on the board, it should be noted that this is the least we expect from the big boys. The question is whether we will have a repeat of last year and a 5000/1 shout like Leicester (or Lester), reach the heights again. Probably not ;). Still, with Hull beating the Champions in the opening game we can all take comfort in the fact that anything can happen, and that it’s very, very, very, early doors. Those that had a very poor start and especially those who ended up playing an auto-select team, there is plenty of time, it’s not over, in fact, it’s barely even started.”