Welcome to the gameweek 14 review. How was it for you?

There is only word to describe this weekend’s events. Incredible. Four games were pivotal and sent shock waves throughout the FFUK league. They featured the teams most fancied to win this season’s Premier League.

First up on Saturday lunchtime it was City Vs Chelsea, Pep vs Conte. The game itself was fairly eventful to say the least. City looked good going forward initially and scored through a Cahill (0) own goal. I was cursing. Chelsea were doing their best to look as bad at defending as their hosts. KDB (2) then submitted his entry for miss of the season, can anyone think of a worse one? Fortunately for those who owned Conte’s men they sprang into action with Costa (12), Willian (6) and Hazard (9) all getting on the score sheet. Final score 1-3. Great win for the Blues. But it didn’t end there and we saw further ramifications for our fantasy teams. As you can see from the pic below, Aguero (-1) saw red for a disgusting challenge on Luiz (2), his second this season, incurring a four match ban. Incredible scenes. Fernandinho (-1) then joined him for an early bath after pushing Fabregas (4). Both teams scuffled and have been charged. Aguero’s self enforced break was not great news for the 42 FFUKers who captained him (once again the most popular pick) but it gives all owners plenty of £££ to redistribute around our squads. Lets call it an early christmas present. Aguero is not back until NYE. Who do we go for? Costa, Kane, Iheanacho, Anichebe or have you got someone else up your sleeve?

In the 3pm kick offs Spurs smashed a sorry Swansea 5 – 0. Not that incredible on its own. But Kane (13) has timed his arrival perfectly. In fact 33 FFUKers captained the Spurs no. 10. Many Aguero owners will now shift their attentions to Harry as he looks to have hit form at just the right time. His brace in this game was enough evidence for many, including myself to make the move and this season’s price fluctuations mean that many have gone early. Hurri-Kane cant do it all on his own though and in Son (11) and Eriksen (18) Spurs currently have a couple of capable creators to provide the ammunition for their captain.

The evening kick off came from the Taxpayers stadium. West Ham were once again generous hosts and it was time for the performance of the season so far. Not Andy Carroll (5), although he did manage a goal in a cameo appearance. It was all about Alexis Sanchez (23) who with a hat trick, assist and the inevitable max bonus was not only the highest scoring player of gameweek 14, not only the highest scoring player so far in any gameweek but now also the top scoring FPL player overall this season with 110 points. Incredible. He was magnificent throughout and his dummy and finish for his 3rd was a thing of beauty. 37 FFUKers captained the Chilean for what was the best captaincy pick. Pat yourselves on the back if you were one of them.

The only other game that needs mentioning was from the Vitality stadium where Bournemouth and Liverpool served up a feast for the eyes and arguably the best comeback of the season so far. Incredible. The visitors raced into a 2-0 lead and then were in front 3-1 until the last 15 minutes when it all went crazy. The impetus was provided by a young Ryan Fraser (15) on as sub with a goal and 2 late assists. One to watch at 4.9 if he can nail down a place. Cook (7) got them level before Ake (7) got his second in 3 games to win it and again at 4.3 if he can nail down a place looks a great option. The Liverpool midfield points rotation continued with Can (11) and Mane (11) this time the best picks. Mane is now the best scoring liverpool player with 81 points. Questions remain about the defence though.

Thats enough of that. What we really want to know about is the top 50 in the FFUK league. Ok lets go. 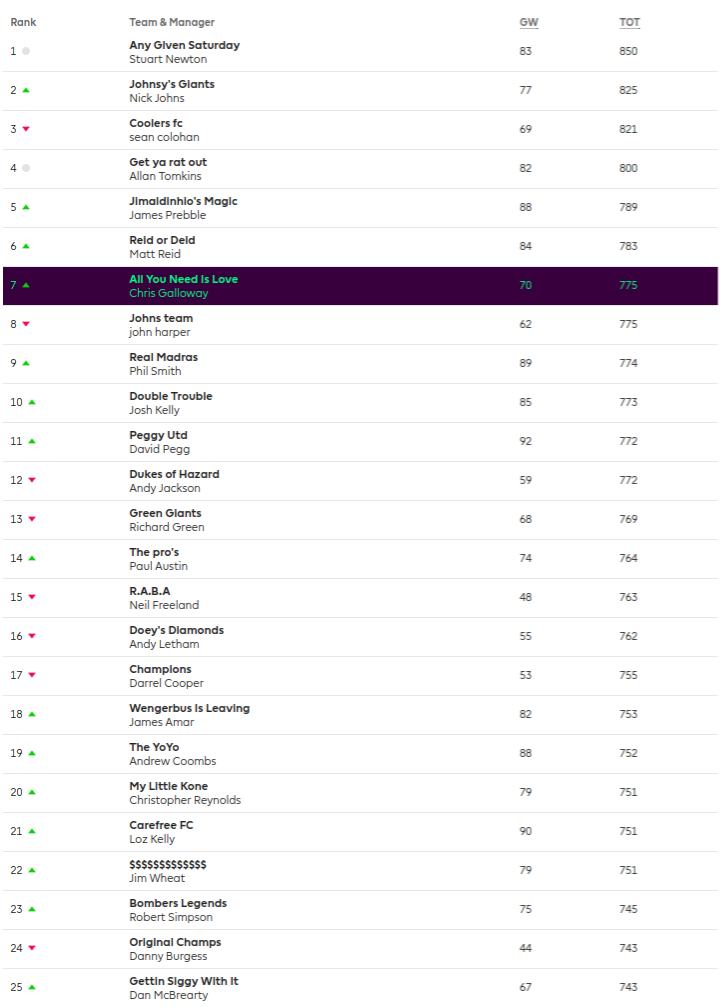 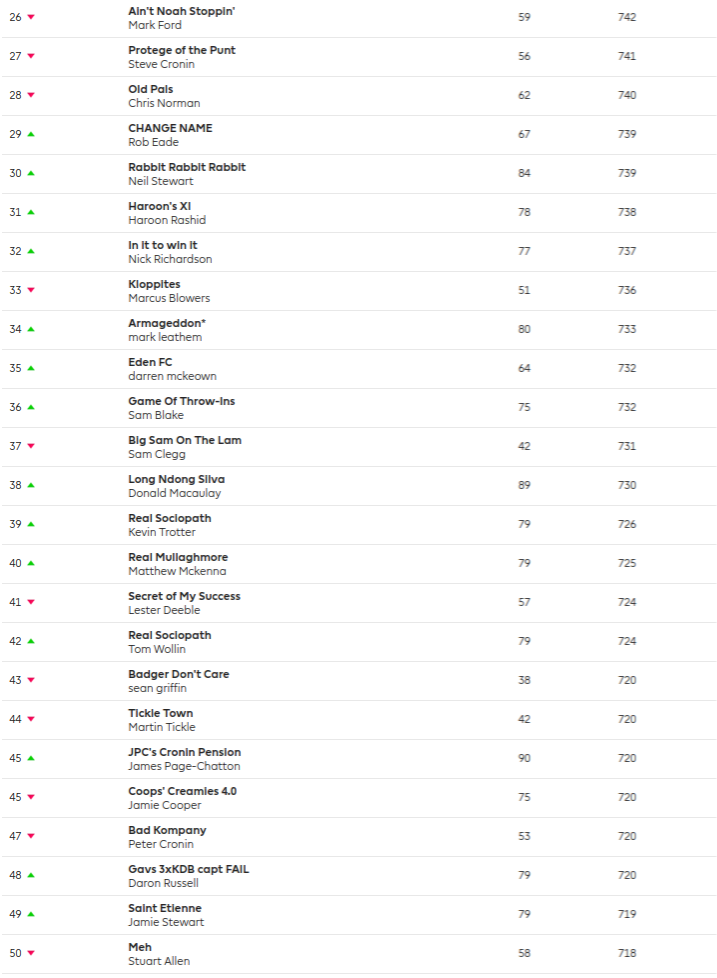 Stuart Newton (1st) retains top spot by virtue of his 83 points. He was one of the clever ones with Sanchez captain but could also rely on Costa, Hazard and Boro’s Gibson all providing vital points for our league leader. Once again Stu didn’t even need Heaton to play. Come on guys he is beating us all with 10 men.

Phil Smith (9th) was the best scoring manager in the top 10 with 89 points. Phil captained Kane but also had points from Sanchez, Mane, Evans and Walker. But with 9 out of the top 10 owning Aguero there are sure to be some interesting transfers this week, I notice quite a few have already pushed the button.

There were other good scores and a couple who reached 90 including James Page Chatton (45th) who managed it with captain Sanchez leading the way, followed closely behind by Costa, Mane, Puncheon and Walker.

It would be remiss of me not to welcome some new names to the top 50. After some slow starts the boys are well and truly back in town and in some cases are flying up the table. Welcome to where it’s at Jamie Stewart (49th), Daron Russell (48th), James Page Chatton (45th), Donald Macaulay (38th) and Kevin Trotter (39th). Well played guys but the work starts here.

However there’s always a flip side, lets look at those in the top 50 who did not fare quite so well and are sliding down the metaphorical mountain. I am guessing none of them gave the armband to Alexis this week.

42 was lowest score in the top 50 and is shared by Martin Tickle (44th) and Sam Clegg (37th). I’m not sure if this is a good thing or not. Sam went with Lukaku captain which, as he well knows, didn’t pay off. Costa, Mane & Hazard were the only ones that did. Martin had Aguero captain so got a big fat -2 for his efforts with that one. Defoe, Mane, Evans and Walker provided some resistance at least. Lets not dwell on these, I’m sure Martin and Sam wont mind if we move on quickly.

Finally, the eagle eyed amongst you might have seen some rather lovely FFUK stats appear on the facebook page on Saturday (see below for the GW14 offering). Well I think its about time I introduce you all to the latest member of our team. He has been busy working away in the background and you are going to love what he has done. It’s early days but for now lets give a big FFUK hand to Steve Cronin (27th) our brand new Hoffmeister. Welcome aboard Steve. Loving your work. Incredible. Much more on this soon. 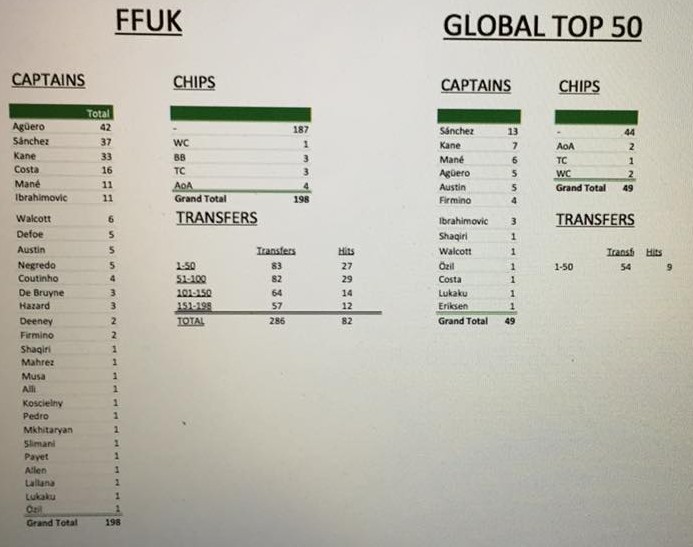