Welcome to the gameweek 16 review. This is all Movin’ Too FAST. My festive cheer is dwindling and now I am dreading the next couple of weeks, its like I am watching a christmas nightmare unfold right in front of my eyes. We must get through it somehow. I think Booze may help. How quickly it all changes? I was happy enough with my lot but now my 3 kings in attack look more like shepherds, my midfield stars are on the wane and lets not even talk about my defence who have clearly been on the egg-nog. But enough of the nativity puns let’s look at what went down. As you may have guessed it didn’t go well for me personally, i’ll try not to let that affect the review too much.

10 games over 24 hours. It all happened so quickly. On Tuesday Arsenal forgot they need to put effort in to win a football match. Everton remembered this after about half an hour and duly went on to win 2-1. A lesson learnt there for everyone. Sanchez (7) started it all off, which delighted the 33 FFUKers who gave him the armband, but it was all about the Toffees defence with Coleman (8) , Baines (7) and Williams (11) all successful. Bournemouth also defeated the champions, Leicester 1-0 with Mark Pugh (11) scoring his first of the season and earning max bonus in the process. Any owners of Bournemouth defensive assets were also rewarded. Then it was Wednesday.

8 games to come. Dinner out the way. I sat down to enjoy it all. It was a slow start. Stoke and Southampton played out a 0-0, points shared. Plenty of managers with their defenders sat back and reaped the rewards. Who doesn’t love a clean sheet at this time of year? There were more. Chelsea downed Sunderland 1-0 via a Fabregas (11) goal however Costa (2) drew an unfamiliar blank much to the discomfort of the 59 FFUKers who gave him the armband. It was the same score at the Taxpayers Stadium as West Ham won a game. Christmas came early for the hammers. Heaton (12) owners partied harder though as he saved a pen and earned max bonus, even though the penalty eventually went in. 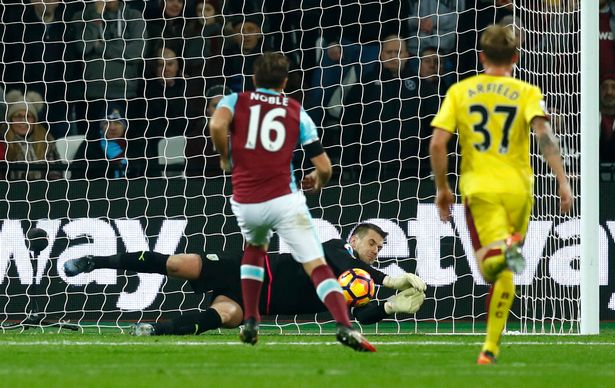 Even Man City earned a clean sheet, of course this was without the “help” of Stones (0) who did not feature. Not bitter at all you overpriced, overrated, joke of a defender, i hope you choke on a mince pie. The Citizens won 2-0 over a Watford side that took the evening off. Zabaleta (14) was the star of this one with a goal, clean sheet and max bonus.

There was another clean sheet for Spurs against a doomed Hull side. Eriksen (19) was the level best points scorer this week and involved in all the goals in a 3-0 win. Previously a very inconsistant player he looks to have found a new level. I must admit I didn’t really take much notice, until know, he has shown glimpses before. Kane (2) on the other hand looked woeful. I brought him in this week, of course, and captained him, I was in good company, there were 54 in the league who had done the same thing. Useless. Obviously he gets another chance but to be honest if he does nothing against Burnley I am getting rid for Zlatan (11) who was instrumental once again for Man United as they got a lucky win over Palace. This is not the time of year for sentimentality. Kane is having his last glass of sherry and he can FFUK off somewhere else unless there are returns this weekend. I didn’t like the guy much before this and now he has gone right down in my estimation.

Liverpool also ran out 3-0 winners with Lallana (19) the star of the show. Another who has returned with incredible consistency and right now looks the best liverpool midfield pick. I still own Bobby (3) who since the teeth whitening (and loss of his mate Phil) has lost his shine somewhat. At least Lovren (6) got a clean sheet! 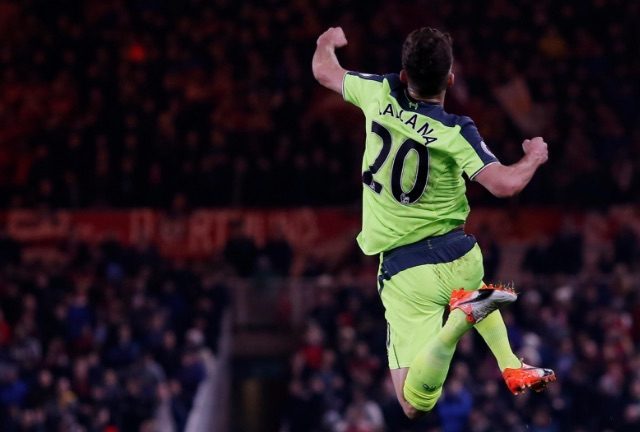 Only 1 other game and it was WBA who smashed sorry Swansea 3-1. A late Swans consolation was a sickener for those with Albion defenders. I have absolutely zero sympathy for you all 😉 Rondon (17) scored an amazing hat trick of headers. Incredible. This hasn’t been done since 1997 when a certain Big Duncan Ferguson achieved the feat against Bolton Wanderers. 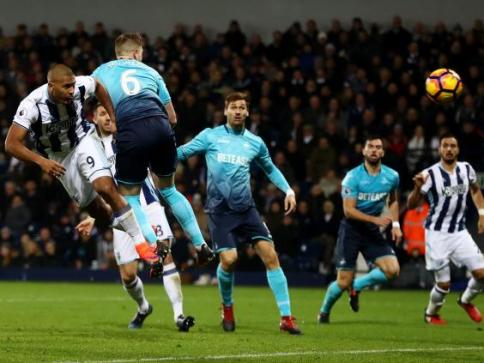 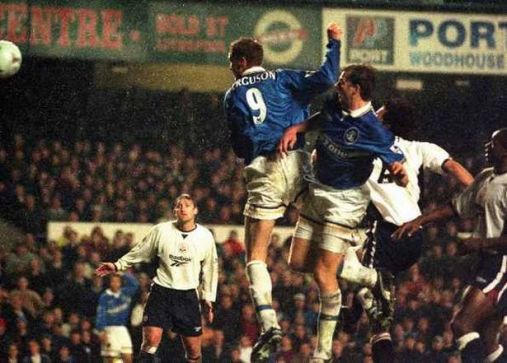 That’s the games, let us now focus on the top 50 in the league… Here is the latest table: 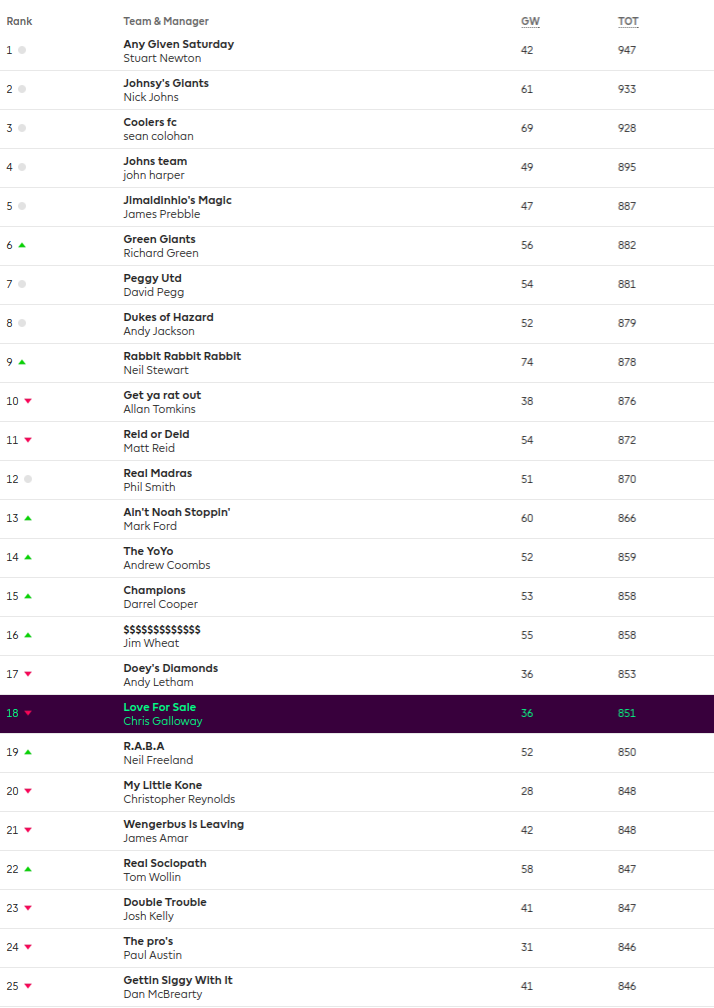 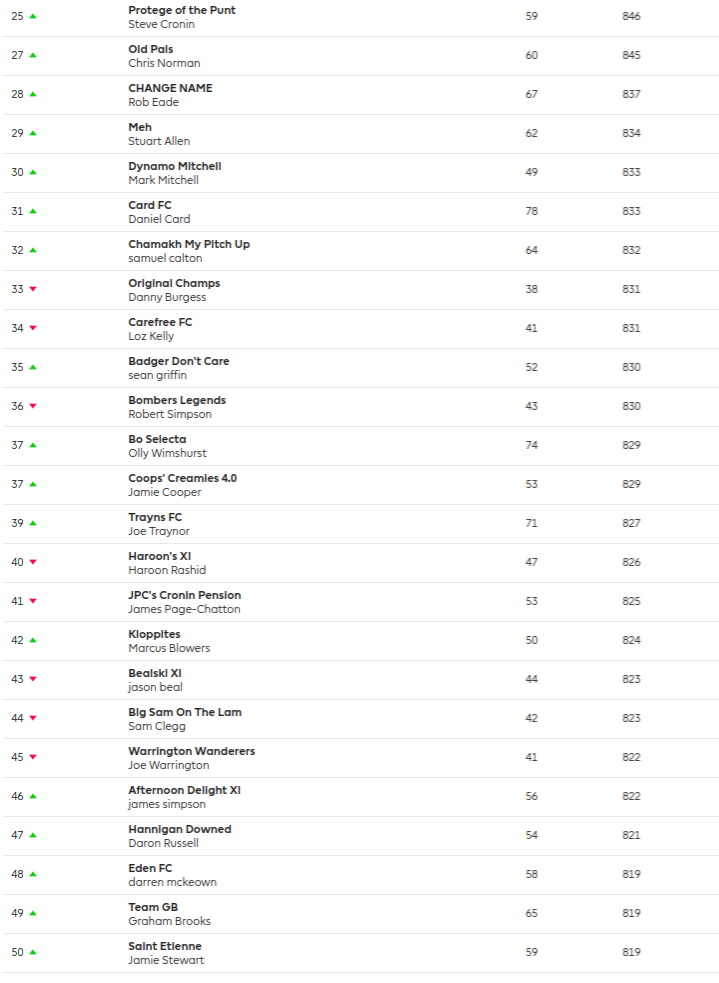 Boom. Stuart Newton (1st) is clinging on to top spot but the gap is dwindling. FAST. Stuart’s 42 this week was distinctly average. Actually the average was 48 so plenty were. Before we reveal those at the bottom of this week’s barrel let’s look at those who prospered. Lets run down all those teams in the top 50 who achieved a score above 70 this week. I am sure they are all sitting around somewhere congratulating each other. Bah Humbug.

Congratulations to Daniel Card (31st) who was the top scorer this week with 78 points. Coincidentally the same top score as last week or is it all some xmas conspiracy? Despite Captain Kane (4) Dan had Rondon (17), Pogba (12) and a defence which is the envy of us all. Bravo (6), Clyne (10), Williams (11) and VVD (9) all providing plentiful points.

Sending Christmas Cheers to Dubai next and saying well done through severely gritted teeth to my old adversary Neil Stewart (9th) who was the best scorer in the top 10 with 74 points. Neil has made a monumental ascent recently after a slippery start. He was also the only FFUKer who captained Eriksen (38). Clearly a master stroke which highlighted the folly of my Kane captaincy. We both have Shaqiri (1) in our squads so either he is doing something wrong or I am doing something right?

Another man feeling pleased with himself over in Dubai right now is Olly Wimshurst (37th) who also managed a very impressive 74 points. Olly gave the armband to Sanchez (14) which in hindsight was very wise. 33 FFUKers made that very same move in a gameweek where any captaincy points were gratefully received. Olly also had Lallana (19, Walker (11), Azpi (8) and the Bournemouth defensive duo of Francis (6) and Smith (6). Well played sir.

Well done to Joe Traynor (39th) who doesn’t live in Dubai but near Slough. Not well done for that in itself but Joe was also one of the lucky ones in the somewhat exclusive 70-something club. Captain Sanchez (14) started it all off well, then Walker (11), Azpi (8) and Font (6) did their thing before Zlatan (11) and Pogba (12) combined which I am sure delighted him as a Manchester United fan.

OK it is now time to look at the strugglers. And I include myself in this. Again. 40 points last week, 36 this time. FFUKING HELL. Harry Kane did nothing at home to hull we know this. Defoe and Costa were also quiet. The Shaq has to go I think. Firmino the same. Siggy and Sanchez are ok. The last chance saloon is a busy place for me right now. I may even take a hit to remedy the situation. I need to do something. FAST.

However it is always good to know there is someone worse off than you. That is unless you are Chris Reynolds (20th) who only managed 28 points. Ouch. Captain Costa (4) was bad but then it never got better and only Clyne (11) provided any resistance at all. What made it worse was that he could only put a team of 8 men out on the pitch as the festive risk of rotation well and truly kicked in. Bad times but at least there isn’t long to go until you get a chance to put it all right. Roll on the weekend.

Paul Austin (24th) didn’t fare much better with 31 points. Not that he wont be feeling like he just woken up from a terrible xmas party nightmare. I shared his Kane (4) pain.Other than Williams (11) his team was a sea of 1s and 2s. Not a pleasant image at all. Wipe the seat down and lets re focus our attentions.

That’s it. Another crazy gameweek gone. Just 1 to go before xmas.

Before I go I must say a BIG FFUK HAPPY 30th BIRTHDAY to Steve Cronin (25th) aka the Hoffmeister. Hope you have a splendid day (well done for having your bday outside of a gameweek so you can relax, really impressive planning) and massive thanks for the gameweek stats that you are providing! See below for the latest example and look out for the GW16 selection once the deadline has passed on Saturday.

Well done for making it all they way through. That wasn’t very FAST was it.