Welcome to the mayhem that was GW28. Just 4 Premier League games remained because of the FA Cup Quarter Finals. This gives us an opportunity to look at each game individually before we move on to discuss the latest movers and shakers in the FFUK top 50.

With just 8 teams playing our FPL squads were stretched to the max, that 4.0 defender who you had not used all season suddenly becomes very relevant and consequently there was a good deal of apprehension ahead of the team news. With good reason it turned out.

Five goals shared between the two sides but one man stole the show despite an early penalty miss. Midfielder Josh King (18) rewarded his owners with a hatrick, not bad for a player that costs just 5.6. Ayew (6) and the returning Antonio (8) got the consolation goals for the visitors. But it was all about King this game, and when you consider that Bournemouth missed two pens (King and Afobe) just imagine what his score could have been, he would have smashed the record currently held for this season by Sanchez.

Everton defeated WBA with ease and were in fact the only side to earn a clean sheet. Barkley (9) ran the show in midfield with 2 assists but up front Lukaku (12) got a goal, assist and max bonus to take him to both the pinnacle of the premier league goal-scoring charts plus he is now the top scoring fwd in the game to boot. A massive relief for the 19 FFUKers in the top 50, including myself, who captained the Toffees’ talisman.

The remarkable performances from Marco Silva’s Hull side continue, this time it was Swansea who suffered defeat. New boy Niasse (12) was the man to own in this one with a brace and max bonus. Swansea duo Siggy (5) and Mawson (8) combined for the Swansea goal. Llorente (1), who was a particularly popular pick went off after 44 minutes with a dead leg much to the disappointment of his owners 😦

The final game of GW29 gave Liverpool the chance to exact revenge on Burnley after their loss in the reverse fixture earlier this season. Despite not exactly playing well Liverpool managed the win but in truth Burnley fans wont be disappointed to see their team going so close against one of the league’s more established names. Many FFUKers saw an opportunity to bring in liverpool midfielders in particular. Firmino missed out altogether and Coutinho (1) only lasted an hour. The man Mane (2) who was responsible for more transfers in than any other, and was the second most popular captain pick with 16 of the top 50, played the whole game but was remarkably poor. Anyone have Wijnaldum (7) who got the first goal or perhaps even Emre Can (9) who got the winner? Didn’t think so.

Thats the 4 games covered… how did you fare in all the Mayhem? Lets now get down to the serious business of assessing the top 50 in the FFUK league. 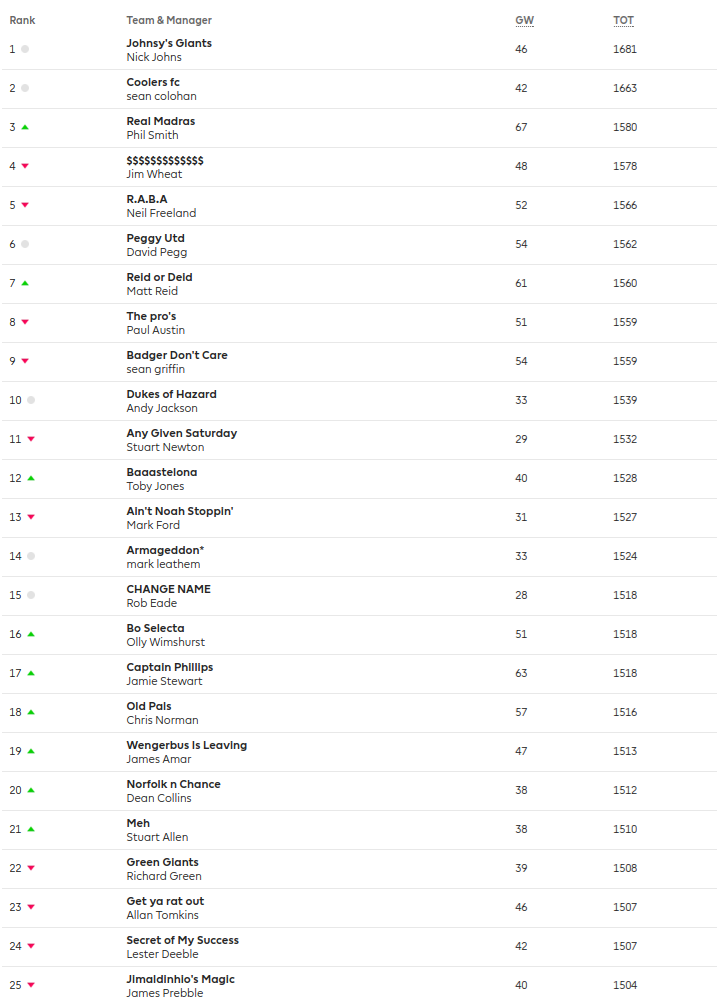 No change at the top. The top two continue to blaze a trail, leaving the rest of us to battle it our for 3rd spot. In fact Nick Johns (1st) is now up to 282 in the world, which when you consider there are over 4.5 million people who play this game that is a phenomenal achievement. Sean Colohan (2nd) is not exactly doing badly at 669 in the world!

There were plenty of hits taken. 13 in the top 20 alone and 47 in the top 50! The record goes to Andre Sharman (31st) who took a -20! It was a week whereby those hits were easier to rationalise with all the players missing. It has been argued that a hit is only worth -2 if it is for a player who wont be playing (if they play 61+ mins and dont receive any minus points for bookings/goals conceded). It was a popular theory but I am not sure it worked out. Two of my hits were for Llorente (1) and Coutinho (1) so I would definitely have been better off leaving well alone, but where is the fun in that? 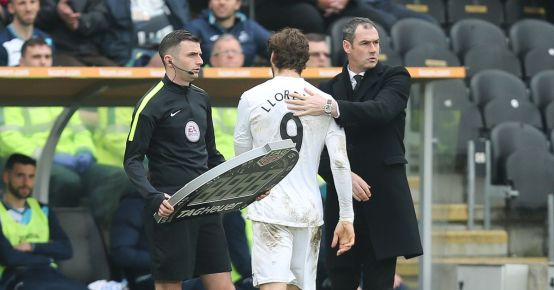 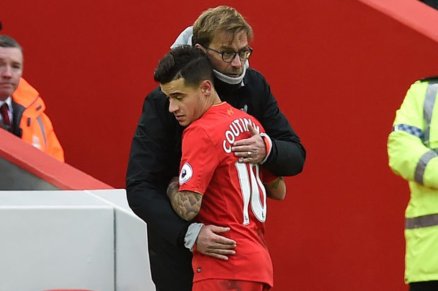 The average score for GW29 was just 19 points so if you had Josh King you knew you were on a winner. Phil Smith (3rd) was in fact the highest scoring player this week with 67 points. With just a solitary hit taken and the aforementioned King (18) in place Phil also had Lukaku (24) captain plus Barkley (9) and Siggy (7). Well done Mr Smith for narrowing that gap slightly to the top, the rest of us now need to follow suit.

Next best scorer was our very own Jamie Stewart (17th) with 63. Of course there was a hit but we wont discuss that as it was only the one. Mane (4) captain wasn’t great and I am sure Jamie is thinking of what could have been if he had picked the correct man to give the armband to. Still he is sitting pretty now and has the pedigree to make a run for the top. One to keep an eye on certainly.

Another FFUK contributor Matt Reid (7th) did rather well this week with 61 points and is now firmly in that top 10. Dont let it slip now Matt! Matt was the only FFUKer in the top 50 to captain Antonio (8), although he also had points from Lukaku (12), King (18) and Siggy (7).

James Amar (19th) had an eventful weekend in more ways than one. He was actually the manager with the least amount of players in GW28 with just 5 showing up. His score of 47 therefore was actually rather impressive. King (18) was pivotal and captain Lukaku (24) also did the business for his side, what’s more he has some seriously good players to come back in next week. Congratulations James!

For once I wasn’t one of the worst scorers, I actually managed a respectable 47 (although that was with the aid of a -8) from 9 men. There were some real shockers, including a couple of 1’s lower down the league, although I suspect that they may have given up this season and are already thinking about glory next time round, a bit like Liverpool and Arsenal 😉 Lets look at the lowest scorers in the top 50.

Mark Mitchell (35th) takes home the unwanted imaginary award for lowest scorer with just 11 points. With both his captain and vice not playing (Kane & Eriksen) it is clear that Mark has taken his eye off the ball in fact he hasnt made a transfer since GW24. I shouldnt really criticise however as he is still above my sorry lot in the league!

Next up is Andrew Roberts (39th) with just 14 points. Another with Kane captain so it went to his vice pick Mane (4) which didnt work out as well as he might have hoped. Siggy (7) was the only ray of light in a dark episode for Mr Roberts.

Kane still makes the review despite not playing in the league this weekend. He did start against Millwall in the cup, but went off injured in the first half with a nasty looking ankle injury, much to the disgust of his owners and Spurs fans generally. Initial scans have indicated ligament damage similar to the injury he sustained in September. No timescale has been put on a return as yet.

3rd worst, so I guess not that bad really, if it helps I was 3rd worst last week. That probably doesn’t help at all. Stephen Baker (49th) is clinging on to the bottom of the top 50, by his fingernails. 17 points was just enough to keep him there for now, captain Coutinho (2) must have been infuriating. At least Antonio (8) prevented complete disaster.

That is it again for another gameweek. Thanks once again for reading. We are back to some sort of normality with a full fixture list this weekend. Before you go check out the details for the End Of Season Party/Awards taking place on Saturday 3rd June and please let us know if you can or can not make it so we can get an idea of numbers.