Welcome to the Gameweek 6 review. This week it is all about the BIG GUNS. This game is all about the premium players but never before have we had so much firepower to choose from for our forward lines. Therefore this week’s review is dedicated to the BIG GUNS. We need a song too. Lets go with Young the Giant and GUNS OUT

I decided early on in the weekend of the title of this review. Sometimes it is a lot easier than others. As it became clear I told Pete and we instantly started discussing songs with guns in the title, and mainly because this was far easier than deciding which combination of forwards are best to own. There are a lot of great songs with guns in the title (or bullets) so I made a playlist. Check out GET YOUR GUNS OUT plus the FFUK GW REVIEWS 2017/18 playlist has now been updated. Dont forget the other FFUK Spotify playlists we mentioned including MUSIC TO FFUK BY which you can add to!

The fantastic five in the image above have already scored 26 goals between them in the opening six weeks. They all scored this week. They could all score again next week. So how do we decide?

Is it their price? Suitability for captaincy? Who they play for? How nailed on are they? Who has the best haircut? Who has the best stats? In reality it is a combination of these factors plus our own opinion of the player. So how do we decide? I can’t give you the answer to that mainly as I am not aware of it myself, I am still searching for the solution. Do we go for 2 or 3 of these options? And at what cost to the rest of our team?

Hopefully this review will help you (and me) make some sense of it all.

Harry Kane (13) was first up to audition in the early kick off. Winner of the golden boot the last two seasons, he was always going to attract serious interest. Even with a slow start and his price tag of 12.5 making him the most expensive player in the game, he is still a very popular pick (27.7% ownership) and with good reason. In fact 35 FFUKers gave him the armband this week and his brace against West Ham was enough for max bonus. Job done. He is a very good pick and a great captaincy option but you pay top dollar for that privilege. The other thing with Spurs is that they have a pair of fantastic midfield assets in Alli (8) and Eriksen (9) who are also vying for our attention. See I told you this choice wasn’t simple. 4 goals scored this season so far.

Next up was Sergio Aguero (11) hot off the back of a hatrick in GW5 he was up against bottom of the table Palace. It wasn’t one to watch if you didn’t own the little Argentinian master. However Kun only managed a goal and an assist with 2 BPS meaning 11 points was perhaps an ok day at the office but not a brilliant one. The 79 FFUKers who captained will have felt that score sufficient but secretly they were hoping for more, escpecially the trio who triple captained! Many of us who have played this game for a while are very fond of Aguero and his ownership is similar to that of Kane’s at the moment, 27.2%. However there are issues. The main one is his manager who is liable to change the team at any moment and more often than not it works as he has such fantastic attacking assets to select from. He is on pens but is Sergio nailed on? That is the big question, one that the other 4 strikers don’t have to worry about. 6 goals scored this season so far.

Romelu Lukaku (7) is the most owned player in the game with 56% ownership. He is the same price (11.7) as Aguero. That means a haul from the Utd front man can hurt those who don’t captain, let alone those that don’t own him. 36 FFUKers captained him this week and that number will increase massively next time round as they are home to Palace GW8. Some will argue he is not as explosive as the previous two but that is arguable as Lukaku has never actually played regularly for a big team before. Big Rom ticks most of the boxes for me. He looks like he may have lost penalties though which is a problem. 6 goals scored so far this season. 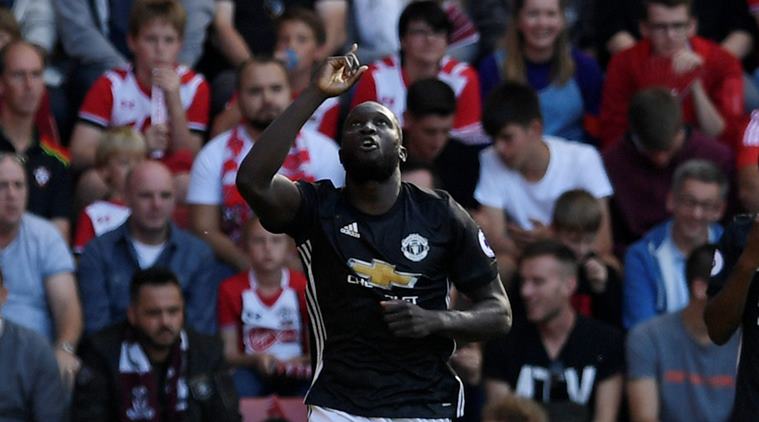 Chelsea’s new frontman is the next option. Alvaro Morata (17) got his first hatrick for the Blues this weekend against Stoke banishing all memories of their previous striker Diego Who? Granted the Potters had major issues at the back but the second goal he scored in particular was a thing of beauty. Arguably the best looking of the bunch… clearly I am biased as a Chelsea fan and I have him in my side already, current cost is 10.3. His 21% ownership is increasing all the time. Only 5 FFUKers were brave enough to give him the armband this time round but after next week’s tricky fixture vs City he has a run that could be potentially very fruitful for his owners. Once Hazard is up to full speed he will take penalties which is a shame but will hopefully also be occupying defenders even more so that the suave Spaniard gets even more chances in open play. Nailed on. 6 goals scored so far this season.

Finally its Arsenal’s new french centre forward Alexandre Lacazette (13) who throws his hat into the ring after a brace and max bonus in a 2-0 win over WBA. One of which was a penalty. Penalties make a striker extra valuable and 3 of this quintet have them in their locker. The least owned out of the pack at 10.4% ownership. Just 3 FFUKers gave him the armband as I guess most felt there were other stronger options (many of which are above). Arsenal also have some lovely fixtures coming up with the next two in particular particularly juicy. If anyone but Wenger (or Pep) was in charge he would be nailed on. 4 goals scored so far.

And I didnt even mention Jesus (0) who, at 10.5, until this GW was a very viable option. Pep dropped him like a stone without a thought to the 31 FFUKers who had captained him (11% ownership overall). At least that is one less to consider. Six options would be way too much!

Either way, before we continue, lets take a minute to look at some GW6 STATS from @officialFPL.

I can also confirm that the FFUK average was up a full 5 points at 65. A record high above the overall average. Big pat on the back to all of us for that one.

Lets now move on to the FFUK league… 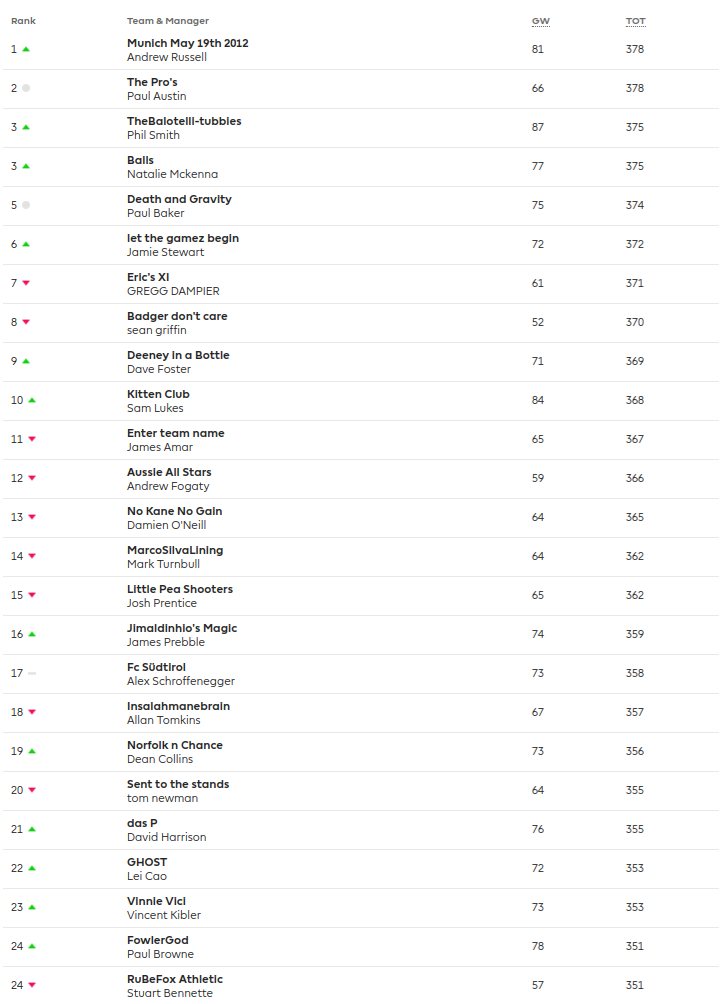 However there were a very select few who scored even better than these two big guns. But for that we need to go to the next section

This week we have 3 heroes that deserve maximum respect. These 3 have achieved more in the FFUK league this week than any other. Hopefully they have recovered now, I assume they were out celebrating after this.

*For attention of all FFUKers… in particular Liam and last weeks top scorer Dean Collins – check out the BEST GW SCORE page for rules on how to submit your scores.

However we now have to look at the Zeroes. These guys will still be commiserating after a tough weekend. If you listen carefully you can still hear the sobbing.

None of them were quite as bad as the league low score of Ryan Cooper (220th) who managed just 35. Ouch.

Next up it’s eviction time…

Finally, as is now customary in these reviews, we come to the eviction.

This week it was not quite so tense. Unfortunately for himself Rob Harding got cut adrift at the bottom and only a Kolasinac (6) miracle could save him. There was no divine intervention and 39 points was not enough therefore he is the man to make way this time. Unlucky Mr Harding your team will be removed from the league by the next deadline. Jason Beal, on 44 points, was the next worst and can breathe a sigh of relief… for now!

That is it for another gameweek, thanks for reading as always. If you haven’t already check out Paul’s brilliant post on the template. We will also be bringing you news later this week of both the FFUK and CHALLENGE CUPS for which qualification begins in October. Pete will be providing us with all the info for any new players this season plus remind those of us who have played before. Listen to Pete when it comes to the Cups, he knows what he is talking about 😉

Enjoy the rest of the week for the weekend will be here again before we know it and we will have to live and die (fantasy wise) by our decisions! Make sure your BIG GUNS are firing!