You’ll have to excuse me guys, but Chris is working away at the moment, and has asked me to get into the driving seat at short notice. Now unfortunately, I’m feeling a bit emotional, my affection for a certain man has grown in the last day or so, and I’m not talking about a certain Argentinian car crash victim either. Yes, while I’m slightly intrigued about how Sergio Aguero ended up getting a rib injury in a taxi in Amsterdam, my heart has been won by this man, Alvaro Morata, who today, I am just willing to be fit. If I could take flowers to his hospital bed, I’d drive there right now.

Fortunately for Alvaro I don’t have a clue where he is.

Anyway, I’m sure no one wants to hear about me getting all mushy over the new Chelsea striker, it’s just that the Spaniard was in pole position to become the premium striker of choice, but then he sort of crashed too, in the 34th minute with a hamstring injury.

So let’s just drive on with the gameweek review, and if you think it’s gonna be full of naff auto-puns, the metaphorical traffic lights just turned green. Here’s The Cars:

The gameweek started as all of us thought it would, though most of us didn’t believe it would actually happen. Kane is still only owned by 36.9%, and notably that’s already shot up by some 200,000 players since Saturday. But as he drove home a brace as part of a 4 nil man of the match performance at Huddersfield Town, only around 20% of us were sensible enough to have captained him.

Instead, over 50% of us waited for Lukaku to get his single goal despite United beating bottom of the league by 4. We are grateful Romelu, we’d just like maybe 1 more, or like an assist or something. Didn’t even get any bloody bonus. Check out Steve’s stats at the bottom of this review including 142 Lukaku captains!!!!

Palace have still not scored a goal this season. Last weekend their first choice striker was injured as well as their number 10, and they host Chelsea (The Champions) next. Their goal difference is -17. It’s October and we’re 7 games in. 0 points. If they lose to Chelsea then they’ll have 30 games left to get to 40 points, which is approximately a 50% win rate. Still, at least they will have played some of the big guns already.

While I’m on this I’ll reach out to the Everton fans among us too. I feel bad for you guys, they were utterly dire in the Europa last Thursday, and I think I would have called the Samaritans if JPC hadn’t made me laugh so much. So I actually felt confident playing my double Burnley defence at Goodison on Sunday, not thinking I would actually get away with it. Thank you very much Stephen Ward and Nick Pope for your combined 21 points (Burnley players by the way). And thank you Everton.

Mind you, who am I to talk, Burnley beat CFC at home this season too. In fact, they’re 6th in the league and have taken points at Goodison, Anfield, Wembley and Stamford Bridge.

Elsewhere, Bournemouth’s poor run continued, as did Watford’s decent start, Liverpool continued to rock, and Arsenal asserted their claim for this season’s 5th place with a win against relegation fodder. Anyone I haven’t mentioned? Well no one would be interested in the City result anyway now would they?

How many of these are in your team?

Let’s have a look at the top of the FFUK league. 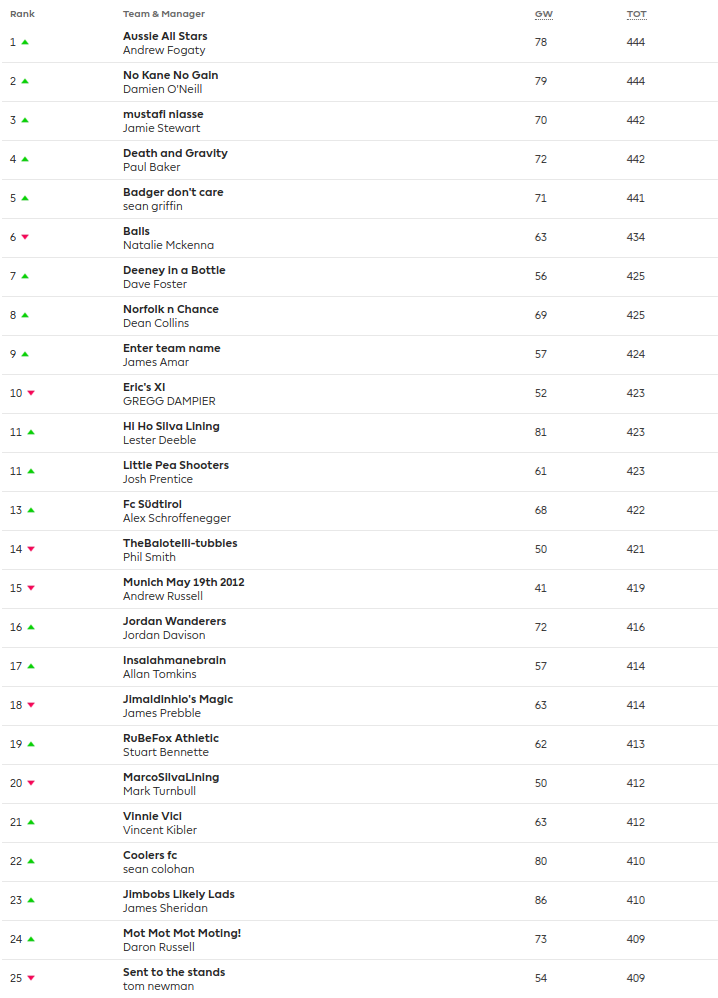 Ok this is interesting. We have a new leader… Top of the league Andrew Fogaty (1st) bench boosted last week. Got stung by no Bailly, Waster. Damian O’Neill (2nd) is tied on 444 points with our front runner.

Jimmy Sheridan (23rd) top scored in the league with 86 points and has submitted his score (all scores on the BEST GW SCORE page have now been verified and updated).

We now know the winner of the September Manager of the Month. Congratulations to Dean Collins (8th) who joins August winner Paul Austin (38th) on the leaderboard. His score of 286 is currently the monthly score to beat. The MOTM page has been updated now too.

I’ll hand over to Chris who is now back and can finish the review. I dont like to blow my own trumpet 😉

Thanks Pete, and lets continue with the review. Its time to kneel down and give respect to those that have outrun the rest of us this week. Who are FFUK’s Ayrton Senna or Louis Hamilton right now, speeding past the rest of us mere mortals. There are some familiar names below who must be feeling pretty pleased with themselves. I don’t think it is unfair of me to say that these five have all had a less than spectacular start and were waiting for this moment. Keep an eye on these boys, if they have another week like this they will be bothering the first page in no time. This week’s Heroes are:

How about the other end of the spectrum? Who would struggle to remember which side of the road to drive on at the moment? These boys need some driving lessons. Better luck next week.

Spare a thought for one of our agents, Neil Gordon (224th) who was the lowest scorer this week with just 21 points. Neil is having a rough time right now. His team name says it all at the moment… No Fuchs Given. If points were awarded for team names then he would be a lot higher in the league.

Next up it is eviction time. Now I know what it feels like to be Noel Fielding and inform one of the group that they are leaving the bake off! Fighting off the tears right now… This week the man to go is one of the FFUK team, a site poster, agent and the WhatsApp group’s quizmaster. None of that is any use when you score the lowest gameweek score in the Conts mini league. Duncan Hannigan’s 33 points was by a distance the worst score this week. I have removed him with immediate effect. Fortunately we get a chance to ask Dunc all about it very soon. Stay tuned for that. 7 down. 31 remain. Who is next to go?

As this international break plods on and we are subjected to football at walking pace and, if you are unfortunate enough, we get the bonus of an English national team so lacking in direction, energy, leadership and quality. Three lions? hardly. If you hadn’t guessed I am not so much a fan. However here at FFUK we are lucky that there is plenty going on to keep us from falling asleep at the wheel.

We are on the cusp of cup qualification! We really are. For all the details check out Pete’s first Cupdate of the season. Is your team ready for qualification month?

If that isnt enough for you we have a couple of fantastic posts on the site from our “experts”. Have you read Stu’s Aye Aye Captain? How about Reidy’s A Case for the Differentials? Both containing vital info for the long drive ahead.

How about a bit of FIFA 18? We are looking for players to join us on the PS4 in our new Pro Clubs team. Check out the post for more info and let us know if you are up for joining.

Finally we have a treat in store for you next week. We are planning our next installment of the MEET THE FFUKers video on Wednesday evening with a trio of FFUKers alongside myself and Pete. Once Paul has finished reading the articles above he will be eagerly awaiting this as it is the 5th thing he must do. We will be discussing our performances in GW7 and we will look ahead to how our teams are set up for GW8. Plus we will answer any questions the community has – FPL related ideally ;-). Anything you want to ask? Tactics? Formations? Premium Players? Cheap bargains? Let us know… I cant promise we will have all the answers but I hope it will be good fun finding out. Tune in on Wednesday, details of the video will be posted on the WhatsApp and Facebook groups.

That is it for another review. Thanks once again for reading and for waiting. Life got in the way a bit last week. Thank FFUK it was an international break or my FPL team may have suffered. I’m off to pray for no more injuries for my players in the rest of these international games.