Posted on December 6, 2018 by Chris Galloway

Welcome to the GW15 REVIEW – SUDDENLY

That was a bit mental wasn’t it.  A midweek round of fixtures is often fraught with rotation and the action can be a little unpredictable. This one was no exception. Thanks to Duncan Hannigan (33rd) for the song suggestion as there were plenty of Angry Anderson owners out there on Tuesday night. Those with Arnie were also thrown into a spin when he pulled up injured. SUDDENLY things started to unravel.

What we need now is a reminder of the good times, fear not if you have had a bad gameweek, another one is just around the corner. Console yourself by watching two young lovers tie the not in Melbourne, Australia back in 1987. Over 30 years ago. FFUK that makes me feel old. Suddenly.

Apparently Kylie insisted on this song being used in this scene. Little did she know that one day it might become the theme for a FFUK midweek gameweek review!

Back to the matter in hand. City assets were the topic of conversation for many of us pre-deadline. With the news that Aguero (0) was out many of us were forced into hits and moves that we weren’t planning on until very recently. Which City mids were going to play? Of course Pep kept his cards close to his chest, as usual.

Suddenly the deadline was upon us, team news began rolling in. Nothing too extraordinary then the City team dropped. No Aguero as expected but also no Sterling (0). Woah City’s two best attackers rested. No Laporte (1) either although he would make a late cameo to mess with his owners further. Carnage. People began checking who they had captained and more importantly who they had vice captained. Check out Statto Steve Cronin (23rd) and his captain stats below. 56 FFUKers went with Aguero or Sterling!!!

Let’s investigate the Official Dream Team for GW15 to see where the points ended up.

Of course a City mid was going to be best scoring player but working out which one was always going to be the issue. Step forward the one that no-one owns Riyad Mahrez (13) with a goal, assist and max bonus was the top scorer, demonstrating the Cityzens quite extraordinary squad depth. Mahrez would get straight in any other PL side.

Next up was a duo that a few of us actually scored points with. Did you own both Wilson (12) and Fraser (12)? Because if you did then the gameweek started well as the pair combined to dismantle Huddersfield. With some tricky fixtures for the Cherries on the horizon is this the time to be doubling up with them if you only own one? If you own neither then one looks a safe bet to bring in.

With the aforementioned Angry Anderson (2) and Arnautovic (0) owners still spewing, who was left from the hammers to provide points? Arnie’s replacement was forgotten man Lucas (12) who scored a brace with Snodgrass (11) providing the assists. Snoddy at 5.2 or maybe a punt on Lucas at 6.2 is brave but could be ultimately rewarding.

At the back there were no clean sheets at all. A feat that last occurred back in 2010 which shows just how rare it is. Let that sink in. No clean sheets for anyone! Except for those lucky enough to own either of Vincent Kompany (8) or more likely Kieran Trippier (6) who were both taken off with a knock before their team conceded late on in their games.

So that was that. Let’s see how this affected the FFUK league. 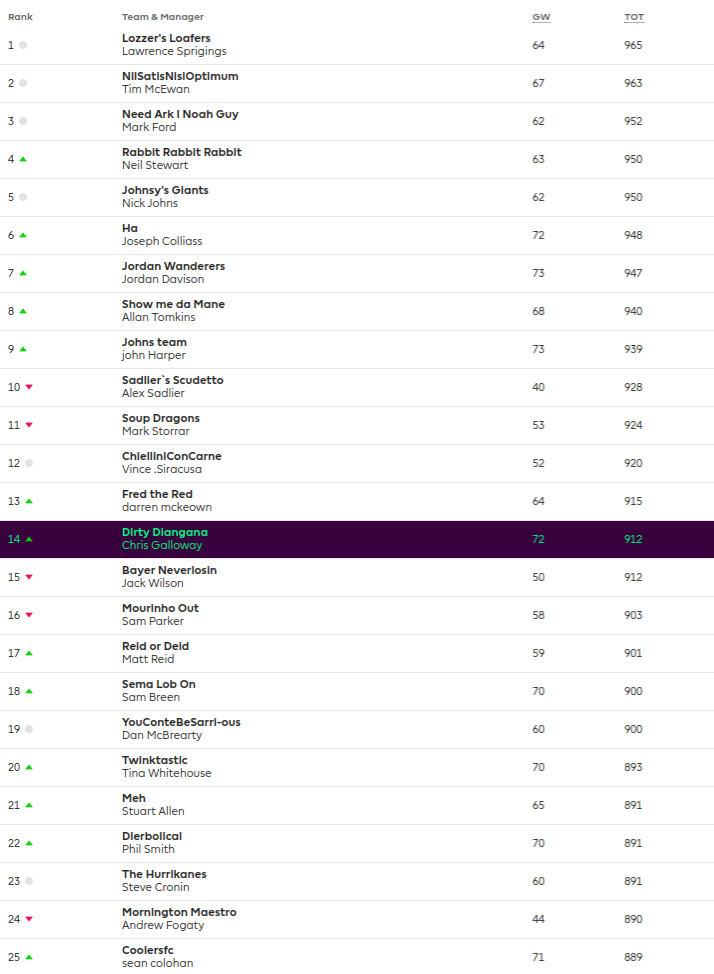 Our top two remain unchanged, im getting bored of saying this,  Lawrence Sprigings (1st) and Tim McEwan (2nd) are still slugging it out for supremacy. It was a case of very similar scores at the top with the top 9 all scoring within 11 points of each other this week. Not much movement then. But elsewhere there was plenty.

The two biggest scorers this week with 78 points each were Sean Griffin (63rd) and Steven Almond (137th) proving that its not just the big boys who know how to play this game.

Sean played his wildcard beautifully so he could captain Kane (12 x 2) and he also owned the cherries pair of Wilson (12) and Fraser (12). Eriksen (6) and Murphy (6) in midfield kept things ticking over and Fabianski (9) did his bit with a pen save. Congrats Sean on a cracking week.

Steven didn’t need his wildcard as he already owned the Spurs talisman and the pair of cherries. Along with Shaqiri (8), VVD (5), Haz (5) and the Doherty (5). Well played sir.

Proving that it’s an incredibly competitive league we are all a part of. The next best score of 77 was achieved by Joe John (96th) and Mark James (117th). The depth of this league is as scary as City’s.

However at the other end of the scale proving not everyone is having a wonderful christmas time (that’s the first mention of it) is Kevin Trotter (141st) who mustered just 17 points. Captain Aguero (0) and Vice Captain Sterling (0) was a ffuking disaster. Arnie’s (0) injury compounded matters along with a blank for Alonso (0). A Shane Duffy (-2) red card was perhaps the lowlight though. No shows for Robertson (0) and Barkley (0) didn’t help either. Only Fulham’s 4.3 fwd Kamara (8) provided any points of note. Chin up Kev. It can’t go as badly as this again this weekend. Can it?

Speaking of which let us now see who is leaving the CONTS mini league.

It was a nervous wait for many for the scores to update. Tom Stacey and Mark Turnbull both survived with 33 points. James Amar thought he was going but he survived by the skin of his teeth with 32. That left poor old Ben Eastwood on 31 points. His Galactico’s let him down. Ben is therefore this week’s evictee, on close inspection his team did not help him at all. Just one man scored any points. Actually one man scored all of his points pretty much. 24 out of 31 or over 70% of his GW score. Apart from captain Kane (2 x 12) no-one did anything but worse than that Ben will be particularly cursing the performance of Duffy (-2) without his stupidity Ben would be safe. Or if he hadn’t made his two transfers of Martial (7) and Hart (3) out for Bilva (2) and Hennesey (1). But that was not to be. Sorry Ben I have removed you from the CONTS league.

Watch out FFUKers it’s a double eviction next week!

Into injury time and Cup Fever is well and truly in full swing. The first round of the FFUK cup fixtures and the second round of Milk Plate fixtures are underway. How are you getting on? Check out Pete’s Cupdate for the latest news and the relevant cup tabs on this site where you will find your fixture.

Finally does anyone else think that Angry Anderson looks a lot like our reigning champ Jamie Stewart (26th)? Another look a like to add to the collection.

As always if you fancy writing something for the site, perhaps around the Xmas fixture congestion that would be great, we could always do with some more posts that aren’t written by us. Get in touch with Pete or myself and we can get you all set up. We are happy to sanity check anything and give you inspiration if you like.

Thanks for reading, and remember look after yourself and each FFUKer.