Welcome to the GW28 REVIEW – RECOVER

With Chris in Berlin I tentatively volunteered to do this GW28 review. I say tentatively, as I was in Germany myself last weekend and knowing how long it takes an old git like me to recover from a three-dayer I wasn’t sure if my head would be straight enough.

Thankfully, after only a few days of mild alcohol poisoning, I’m now feeling A1. To celebrate I thought I’d pick a track from one of my favourite Glaswegiansynth-pop-indietronica-electro-dance acts, so this week’s theme track is “RECOVER” by Chvrches.

My own RECOVERY wasn’t the only one on my mind this GW. Would Rashford or Bobby RECOVER from their knocks at the weekend? Would key City and Chelsea assets such as Aguero, Sterling and Hazard RECOVER from 120 minutes in the Carabao Cup final? Could Newcastle maintain their recent RECOVERY under Rafa? Would Spurs RECOVER from their loss to Burnley and get their flickering title hopes back on track? And would a change in manager catalyse a Leicester RECOVERY from their recent slump?

Two of those questions were answered emphatically on Tuesday night. Newcastle – now looking a totally different animal to the team that only picked up two points from their first nine games – continued their RECOVERY with a convincing 2-0 win over Burnley. Fabian Schär (15) chalked up his third goal and third clean sheet in six games (not to mention an assist in that period) and surely has to be worth a look.

And after Leicester’s 4-1 thrashing at home to Palace at the weekend resulted in the end of Claude Puel and the installation of Brendan Rodgers, the Foxes bounced back with a 2-1 victory over Brighton. Like most Liverpool fans I vividly remember Leicester’s new manager bounce after they replaced Ranieri with Shakespeare – that coupled with Brighton’s dreadful away form tempted me to bring in the likes of Vardy (7) or Maddison (6). But I bottled it and missed out on their points.

Everton had the weekend off and obviously benefitted from the extra RECOVERY time as they easily brushed aside Cardiff 3-0, with Siggy (16) bagging a brace. And Huddersfield defeated a frustratingly inconsistent Wolves side, sparking Town manager Jan Siewart to suggest they still have a chance of a miraculous RECOVERY.

So I ended Tuesday with a mere six points from three players and was in desperate need of a big RECOVERY on Wednesday to make my GW score even respectable. At 19:00 on Wednesday evening a few more of the aforementioned questions were answered.

Bobby (0) missed out altogether. Sterling (1) started on the bench. Hazard (3) was in Chelsea’s starting XI, but didn’t subsequently deliver any attacking returns. Aguero (9) also started, and those of us without him feared yet another hattrick – as it turned out he had to settle for a single penalty strike, but three bonus points made it a palatable evening for his owners. Rashford (1) had RECOVERED sufficiently to make the bench. Several of us who had retained his services had points coming off the bench if he didn’t come on. He obviously did.

Chelsea were up against Spurs and it was the Blues who RECOVERED from the weekend’s respective disappointments far better, winning 2-0 and preventing Spurs from even having a shot on target in a PL game for the first time since 2013.

Other highlights from Wednesday night included a Lukaku (12) brace (can’t imagine that many had him?) and five goals from Arsenal, all from different players.

However, perhaps the main talking points from Wednesday night centred around Liverpool players. A 5-0 win against their reverse bogey team Watford, and yet not even a token assist for Salah (3), who had been captained by 87 FFUKers. However, there were big hauls for several others including VVD (20), TAA (18), Robertson (13) and Mane (13). Mane’s brace means he’s now well above Salah in terms of ‘value’ this season (16.3 vs 14.4 points per million).

Luckily, although I was one of those who had a captain fail with Salah, I did own TAA and Robertson (incredibly, five assists and four bonus points between them) which was just the RECOVERY I needed to finish two points above the average of 53.

I’ve already mentioned most of them but Mkhitaryan (16) is probably worthy of a special mention. After barely featuring since mid-December, he’s now started the last three, returning an average of 11 points per game in those matches. 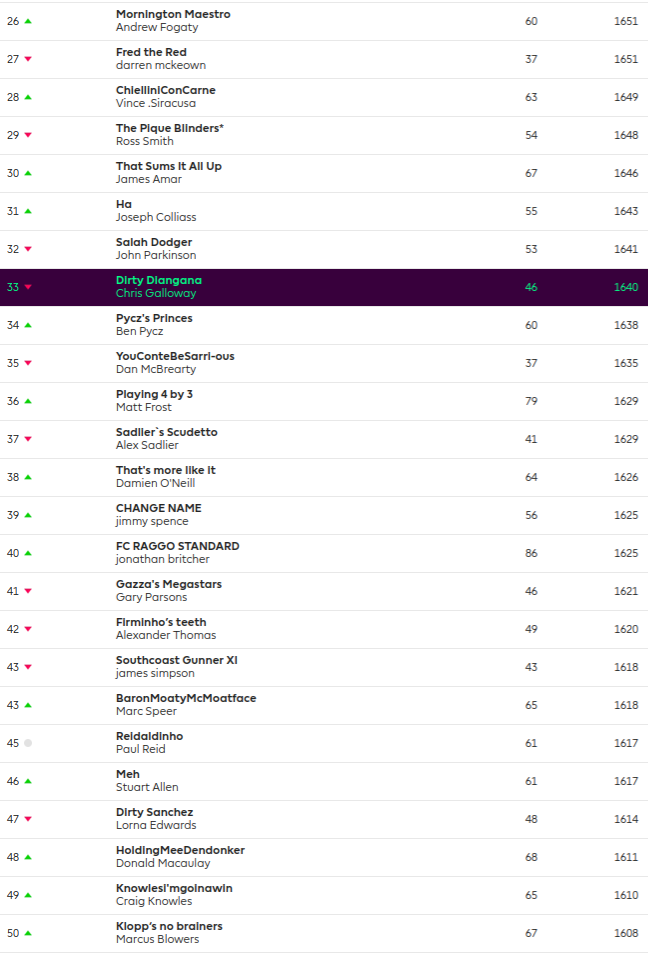 Here’s page one of the FFUK league table. No change in the top two as Jordan Davison (1st) and John Harper (2nd) both scored in the 60s. Nicks Johns (3rd) had the best score (72) in the top 10 and leapfrogged the stuttering Lawrence Springings (4th), whilst Alan Tomkins (5th) completes the top five.

Captains-wise, the 38% of us who opted for Salah were obviously very disappointed. However, most other FFUKers will be quite satisfied. Mane (13), Lukaku (12), Aguero (9), Aubameyang (7), Vardy (7), Pogba (5) and Lacazette (5) all returned attacking points and that gang accounted for 46% of FFUK captains.

Being the nice guy that I am, I won’t name and shame the lowest scores of the week. But I will say that two of the lowest nine scores in the whole league were from teams in the top 15.

So that brings us to the Conts eviction. As it turned out it wasn’t particularly close this week. The second lowest score of 42 was our kid Neil Stewart, who despite still being in 17th overall, seems to be on a little bit of a bad run at the moment. But NDS was still seven points clear of Matt Reid who could only muster 35 points. Matt captained Salah and only had returns from Aguero (9), Pogba (5) and Kolasinac (4). Frustratingly for him, he had a clean sheet and an assist sitting on the bench.

However, don’t fret Reidy – you still lie in 15th overall and there’s still 10 GWs to go, including some monster doubles, so plenty of time to RECOVER…

That is all from me, watch out for Cup news coming very soon from our Pete Cronin (20th). What’s more, I hear that Stu Allen (46th) is on review duties next week.