After last week’s Temptation review this one was going to go one of two ways. Either I was happy with the move i made or I royally FFUKed it. The tune of the week may give some indication. I was not alone in having transferred in Harry Kane (1) and captaining the Spurs talisman. But, like Spurs, he can’t be trusted to perform when it matters. We have learnt our lesson the hard way. After deciding on Friday afternoon to bring Kane in, the deadline passed and there was nothing we could do. Harry’s owners were left Helplessly Hoping he would deliver.  Crosby, Stills and Nash foresaw all of this many moons ago and wrote this track just for this occasion, maybe 😉

Before we assess the FFUK league lets take a quick look at this week’s Dream Team and Star Player and I will crunch the numbers as to just how bad my transfer was!

Player of the week is shared on 15 points but by virtue of the fact he is cheaper the star man this week is Wolves’ rampaging right wing back Matt Doherty (15) who managed a goal, clean sheet and the inevitable max bonus in a 1-0 win over Crystal Palace. The Budget Alonso has gone under the radar until recently but everyone now knows just how dangerous he can be.

The other man who finished on 15 points was a striker from North London up against a promoted side but as we all know by now it wasn’t Harry. It was of course the man I removed to get him in. Pierre Emeric Aubameyang (15) didnt start the game vs Fulham but by the time he came on to the pitch the Cottagers had given up so he helped himself to a brace, assist and max bonus. If anyone is interested I wouldn’t have captained him, I would have gone with Hazard (14) who was up against Southampton, upon further analysis the Harry transfer cost me 27 points, if you made a similar transfer have you worked out just how much it cost you? Unforgivable. I may forget but i will never forgive him for this. Thinking sensibly for a moment, I also have to shoulder some of the blame. I knew the risks but should have been stronger, as it was I was left in a confused state on Sunday afternoon helplessly hoping for something to save me, I wasn’t sure what. The bore draw in the Liverpool City game did me a favour as I had a defensive asset from both sides. That was that. Respectability restored, 65 points for my team and a welcome green arrow. Another gameweek done and dusted. What is it about GW8? Always seems to be eventful, there have been some monster hauls over the years at this time. I’m glad it’s over and it will be a long fortnight until GW9 comes back around. 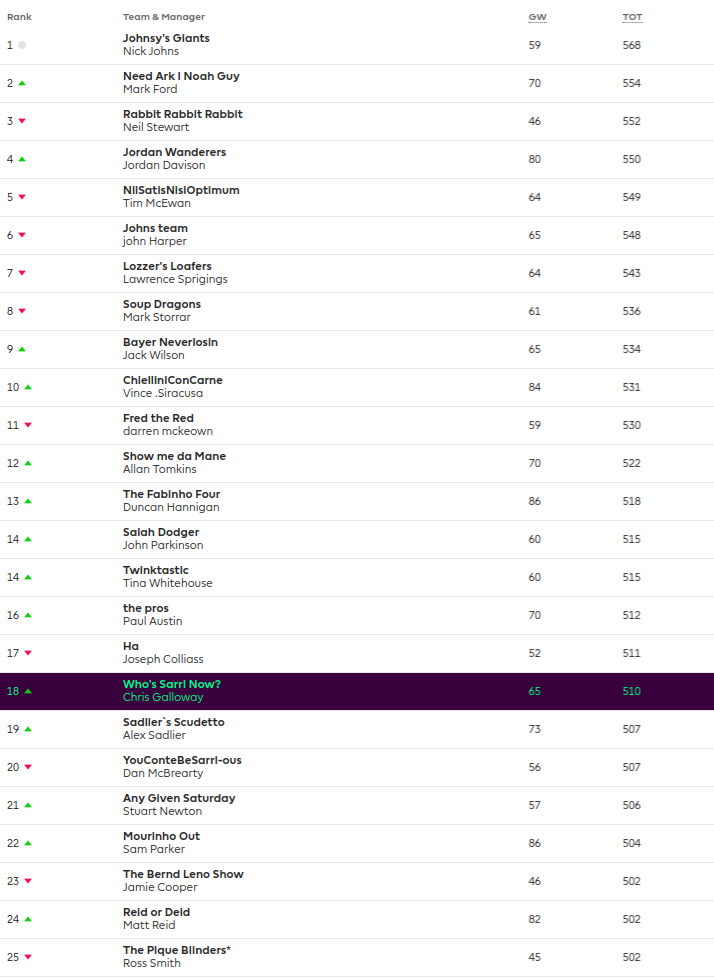 Nick Johns (1st) retains his place at the top after scoring 59 points. Nick transferred in and captained Kane (1 x 2) and Arnie (1) removing Aguero (1) and Lacazette (12) in the process. This makes me feel slightly better about my decision, the logic was sound.

Mark Ford (2nd) made no such mistake. He avoided Kane and captained Hazard (14 x 2). His transfer of Knockaert (3) in for the misfiring Mooy (2) made a lot more sense in hindsight. Keep an eye on Fordy to see what he does next!

Jordan Davison (4th) was another with his eye on the ball and decided on captaining Lacazette (14 x 2) which worked out perfectly. Jordan brought him in with the aforementioned Doherty (15) last week so he didn’t need to make a move and gives himself 2 fts to use over the international break. Well played!

One man in the top 10 did even better than that…Bravo to Vince Siracusa (10th) who decided to bring in and captain Hazard (14 x 2) for Mane (3) and finished the weekend on a humongous 84 points. This stunning move looks obvious in hindsight, well played for not being blinded by the Kane hype train.

Only two FFUKers outscored Vince in the whole league. One of them needs a proper shout out…

Congratulations once again to Duncan Hannigan (13th) who, after finishing second best for September, went one better this weekend as he top scored in the league with 86 points he sky rockets straight into the upper echelons, can he stay there? His best score was achieved via captain Hazard (14 x 2) with Lacazette (12), Doherty (15), Ederson (7), Trippier (7) and Fraser (6) all doing the business – Well played Dunc!

Dunc wasnt alone on 86 points. Congratulations also to Sam Parker (22nd) who used his bench boost to give him an extra 23 points, this is such a hard chip to get right and you have to say 23 points is a fair return, he is thankful to star man Doherty (15) for the bulk of his boost. Will Sam miss it later in the season? Well as the old adage says you can’t miss what you don’t have. He clearly loves a transfer too, with 13 already taken this season!

Another double eviction this week and with the Liverpool Vs Man City game last up on Sunday everything was up in the air. No-one could be completely confident of safety. As the game unfolded it became about clean sheets and then auto subs. After a bit of toing and froing it became clear that any score around the 30 mark was in the danger zone. Two ffukers had to go. First to go was Richard Harrison with 30 points scored, the Hammers fan went with his heart and captained Arnie (1 x 2) but the big Austrian let him and his side down as his midfield and attack were next to non existent.

The next to go was Neill Goodwin who also only managed 30 points with captain Kane (1 x 2) the main culprit here, once again Neil’s midfield and attack seriously undeperformed and Neill will be cursing them as we speak. Neill and Rich you have both now been removed from the CONTS mini league. Ben Eastwood and Sam Blake were the lucky ones who survived the danger zone this time round.

After the international break we return to single evictions. For all the info including which weeks are the double evictions check out the CONTS mini league page on the site

Remember it is cup qualification month, we are a week in already, remember only the top 64 for October qualify for the FFUK Cup. For all the details check out Pete’s Cupdate post

Next an even more urgent notice. Can you help us? We are recording the next in our series of MEET THE FFUKERs videos tomorrow evening. Obviously we hope as many of you as possible will tune in and watch, keep an eye on the Facebook group and on Twitter where we will publish the link.

We are after a couple of FFUKers to join myself, Pete and James Page Chatton for a chat about FPL, nothing too taxing, we will send over an outline of questions so you have some time to prepare answers if you are that way inclined. Let us know if you are free 8.30pm – 9.30pm tomorrow and you are up for joining us. We will send you details. Get involved!

That is it for another gameweek, thanks for reading, enjoy the break and see you on the other side of GW9!