Welcome to the GW9 REVIEW – BINARY

After a long and tedious international break where many of us found ourselves struggling to keep our fantasy minds occupied, we couldn’t wait for the gameweek to begin. Whilst the nations league has provided some much needed competition to the international scene it still doesn’t stack up against the bread and butter of domestic action. Even beating Spain in Spain couldn’t distract us from the important matters such as what has happened to Man Utd, Was Mane’s thumb going to keep him from playing and could Glenn Murray really be a valid forward option once again this the season.

The deadline passed and the early game was a cracker for the neutrals as Chelsea hosted United. From an FPL pov most were concerned with the performance of Hazard (1) and perhaps Alonso (1) with a watching brief on the Utd players to see if any were worth looking at in the future.

In reality Chelsea dominated the first half but having only managed 1 goal there was always a chance Utd would improve in the 2nd half, which they did, in particular Anthony Martial (15) with a brace and max bonus stood out but anyone who has owned him before knows the perils of going with someone with that much risk attached.

Why is it BINARY this week? For many of us this was a painful gameweek. Littered with far too many 0s and 1s. Hence the Binary connection. And the musical choice will please any old ravers as it’s the trance anthem 1998 by Binary Finary. Thanks to Jamie Stewart (26th) for the inspiration and I am reliably informed that the Paul Van Dyk remix is where it’s at. So get your glowsticks on, don your Acid face T-shirt and perfect that gormless look. Now shout “TUNE” at the top of your voices.

For one man very close to my heart the 0s and 1s caused real problems but we will come back to him later. First let’s assess the GW9 Dream Team 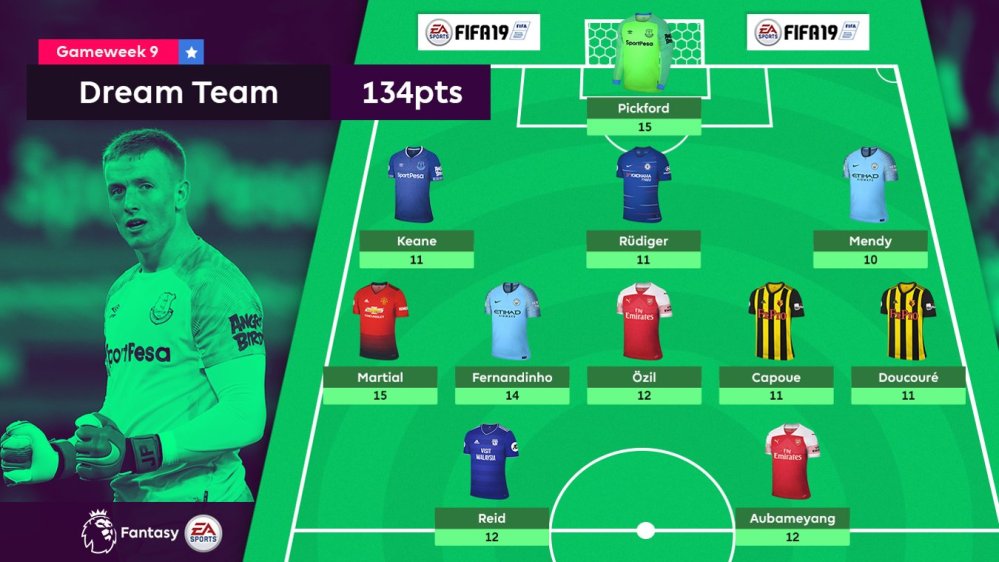 Everton’s Jordan Pickford (15) is the star player with a pen save, save point and max bonus vs Palace on Sunday. England’s number 1 was level on points with the aforementioned Martial but by virtue of his cheaper price the former Sunderland stopper wins the accolade.

At the back another Toffee returned big as Michael Keane (11) got an assist to go with his clean sheet and 2 bonus. Rudiger (11) forgot which end he was playing in and managed a goal and an assist against united to delight his ownership. the 3rd man at the back was a more familar sight in Bendy (10) who managed another assist (along with his clean sheet), right at the end of his side’s demolition of Burnley.

Elsewhere the Watford midfield double up of Doucoure (11) and Capoue (11) reminded us of last season whilst Ozil reminded us all he can be world class when he wants to be up against Leicester on MNF. Completing the midfield is City’s forgotten man in midfield, Fernandinho (14), probably the most nailed on of any City player other than the GK – is he a viable option as a 4th or 5th mid this season. Convention says no but this game has no respect for conventions.

Aubameyang (12) came off the bench again to get a brace and max bonus, That is 4 in 2 games since I sold him for Harry “the 4 season wonder” Kane (1). Alongside him is someone who sounds like he would be more comfortable in a Dallas episode than the Cardiff frontline. Bobby Reid (12) with a goal, assist and max bonus offers us a very cheap option for those bargain hunting he will set you back just 5.2.

Sadly no-one in their right minds got anywhere near the dream team score of 134 but as we can see from Pete’s Stat Flash below the top scorers tended to come from the other end of the FFUK league. Congrats to Mike Cowans-Kebby (219th) who top scored with 76 points and Dave Cull (200th) with 70 points scored. Between the two Rich Harrison (82nd) managed 72 points. Well played to all of you! 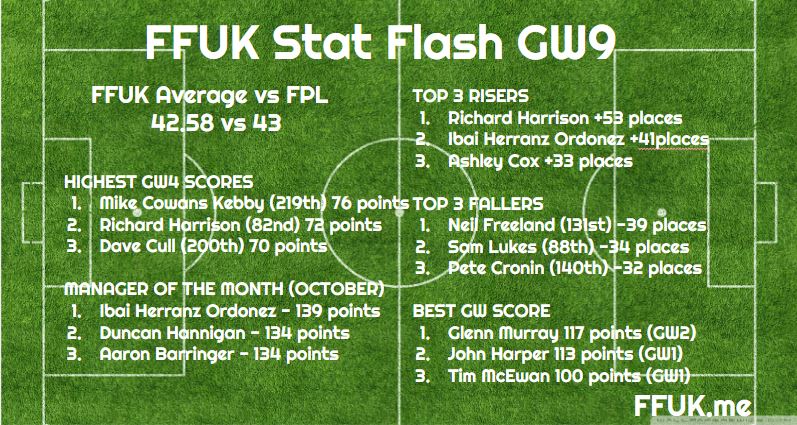 Now lets look at the top of the FFUK league and see what all this meant: 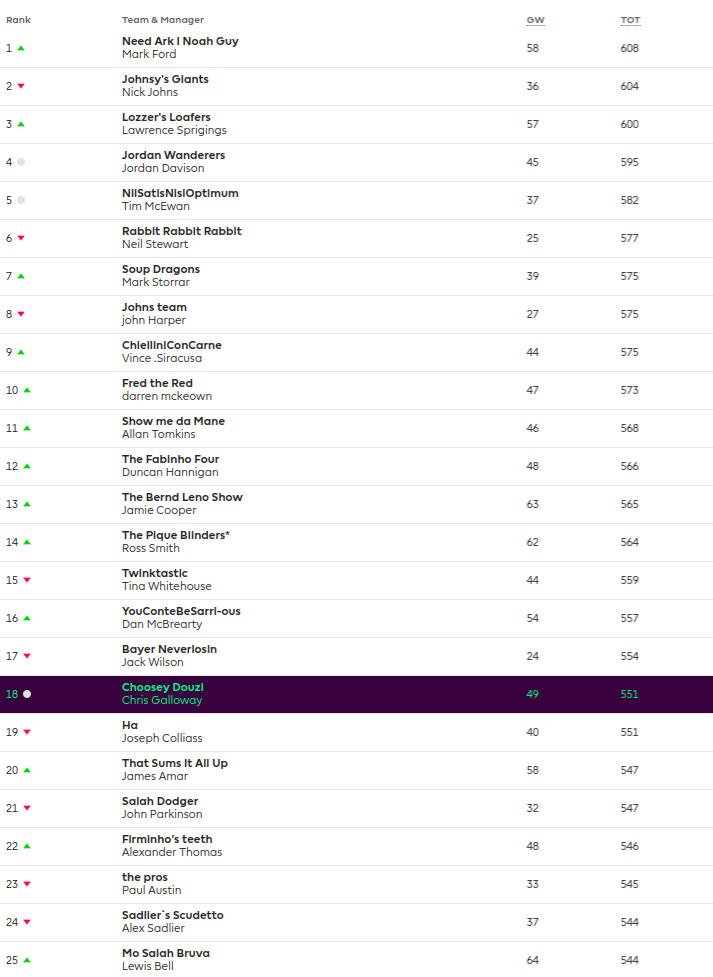 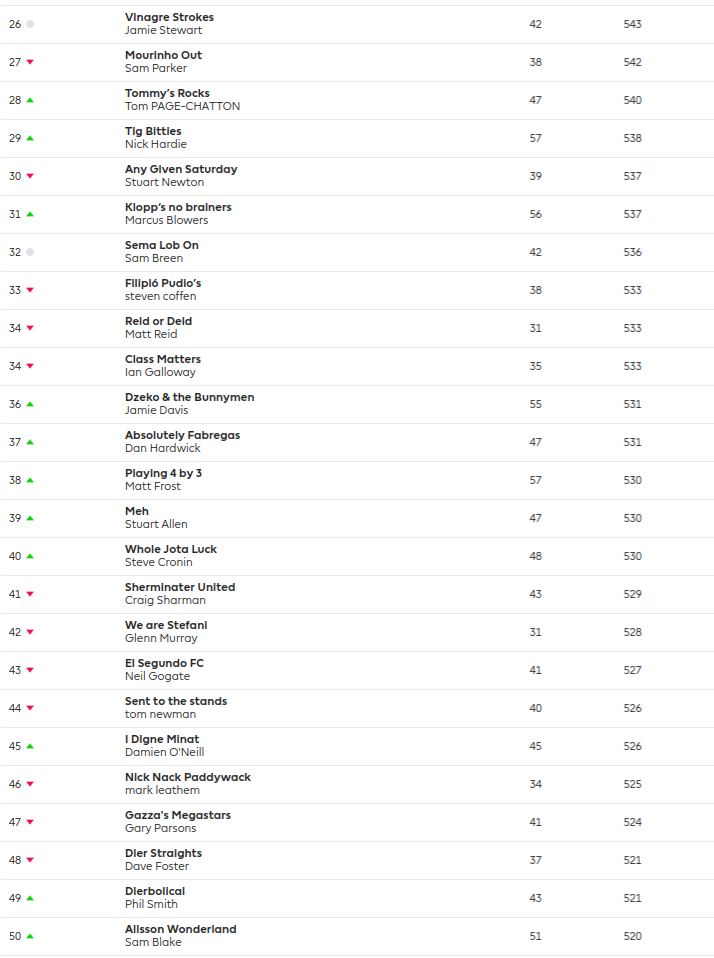 We have a new leader. Congratulations to Mark Ford (1st) who scored 58 points to take him to the top. He took a -4 to bring in and captain Salah (2 x 8), Boly (1) and Duffy (7) although the Brighton man was on his bench. Still Salah did the business. But perhaps most pleasing for the Everton fan, must have been his gk pick of Pickford (15). Fordy tweeted he could retire happy now but for those of us fortunate to hit the highest heights the work now begins keeping the chasing pack at bay. Well played and good luck with that one!

There was only one eviction this week for the first time this season. But it was a biggie. With 8 of his side going the binary route and his captain Sterling (0) not even getting off the bench, not even his vice Kane (2 x 2) was much assistance. He ended on just 22 points and with that becomes the next evictee. Ouch. If you didnt know by now the unlucky man was our Peter Cronin. Unfortunately Pete I have the dubious pleasure of confirming you are no longer in the CONTS mini league. You have been evicted. You can now focus on some sort of recovery in the league and I am confident you will have another good run in the Cup (if you qualify of course). Stay Strong. 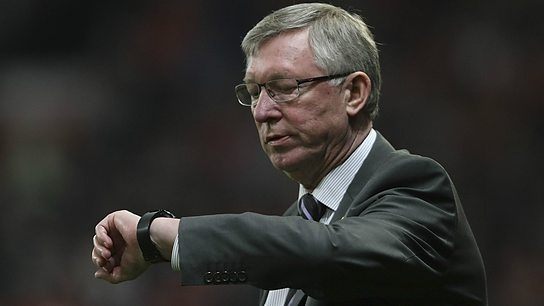 Before we go a couple of injury time snippets.

I briefly mentioned the cup just now, and it is the final gameweek for qualification this weekend. Of course the aim is top 64 for the FFUK cup but if not make sure you qualify for the Milk Plate. All the details in Pete’s Cup Post

Unfortunately (or fortunately depending which way you look at it) I am unable to write the next 3 GW reviews. Thankfully Pete and Stu have stepped in to save the day and write something for GW11 and GW12 but we desperately need someone to help with GW10 Review next week. Do you fancy it? It would need an hour or two of your time next Tues/Weds. We can help you with everything. Let us know if you are up for it please! While we are at it if you fancy writing something for the site also get in touch, its really easy all you need to do is send us the words and we can do the rest. We would love to have more regular articles on anything fantasy related, serious or humourous, or just a big rant about something.

We are also planning another MEET THE FFUKERs video for the next international break so please get in touch if you think you would like to give it a go and we can send you details. Big thanks to James Page Chatton and Craig Sharman for taking part last time. If we dont get any more interest this time round we wont bother to do these any more but we hope they are a good way to get to know the FFUK community. Dont want to be begging for you to take part so please get in touch.

Thanks for reading as always and good luck for the final week of cup qualification! 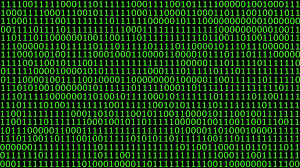