How’s the tinkering going? Or if you haven’t yet set up your team what are you waiting for? Preseason is well underway. It’s a glorious thing. Pressure is off, we are free to tinker at will… But that GW1 deadline will soon be upon us!

The FFUK league is filling up nicely, we now have over 150 teams signed up. Payments are coming in but there are still plenty to come in, please ensure you have paid up before the season starts .

This is the perfect time for you to invite your friends, family and colleagues to the league. Fantasy Football is all about playing against your friends and FFUK is an extension of that. With Cash Prizes. The increase in entry fee this season will allow us to give more prizes for more of the league and more for each manager of the month.

We would love to beat our total from last year of 229 players but for that we need your help so please get your friends involved. Once you are a FFUKer you can invite anyone to be one too! Share this image or the new season post on this site to give them all the information they need. 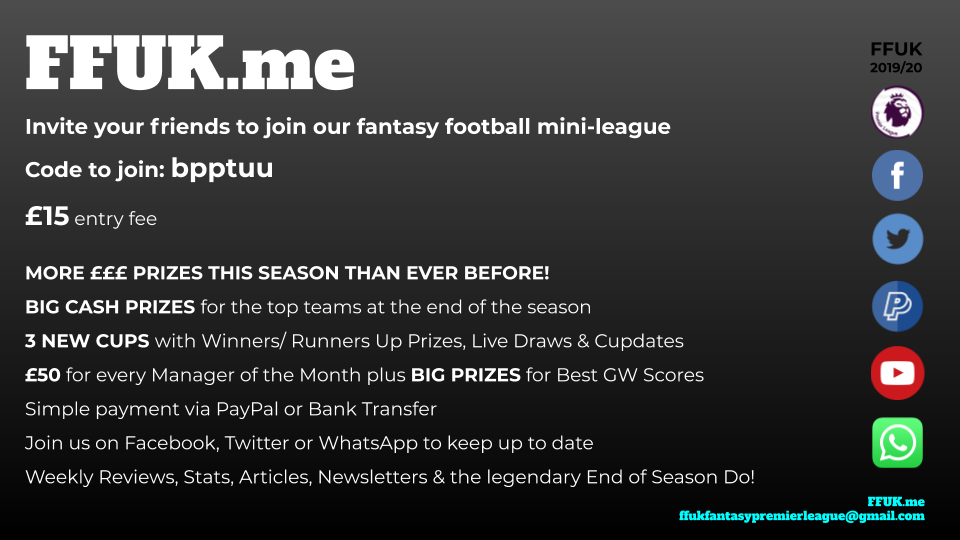 There are even special prizes for those that get the most new players into the league, we will post the leader-board on the Facebook and WhatsApp groups. Get involved and get your name on this leader-board!

Pre-season has seemed longer than usual this time round due to the lack of a world cup or euros and with the game going live so early this year perhaps we are now in a bit of a lull. Thinking about holidays past and future. Daydreaming of winning the FFUK league. It wont be long before we are desperate for the season to start again. But there are a few things we can be doing and a few things we can look forward to here at FFUK.

Have you read Jamie Stewart’s brilliant analysis of the opening fixtures for the whole of the Premier League, called Countdown to Kick Off: Fixtures vs Quality – This is a great article to help you decide those tricky decisions between premium players and also squad fillers.

We have also updated The Book Of Conts – Your guide to the FFUK WhatsApp Group. For those that are involved this may or may not be of use, if not its a handy place to see who supports who and where they finished in the league last season! If you want to get involved then just let us know.

Next up we have Take 5 Season Predictions courtesy of five special FFUKers along with myself and Pete we answer the tricky questions and try and predict what will happen in both the Premier League and the FFUK league.

First up an interview with last season’s league winner Allan Tomkins. Find out exactly how he did it. And what tips he has for this season, this one is not to be missed!

We also are planning something very special for FPL eve. A video special with myself and Pete where we reveal our GW1 teams. Something like this has never been attempted before (probably) so tune in at 9pm on FPL eve (Thursday 8th August) to find out what happens. Links to the video will be posted on Twitter and in the WhatsApp and Facebook Groups on the day.

Then to celebrate when it all kicks off Pete and I will be right in the heart of London in a next level pub with Damien O’Neill. Will you be there to join us? Come along it’s right next to Waterloo station and you can get back to (almost) anywhere from there!

Join us for the best ever season of FFUK!