For example, Man City were solid in the previous week, and they even got a clean sheet! This week the Sky Blues left us feeling flat on a week where 44 of the Top 50 captained Aguero (6). City were held to a 1-1 draw with promoted Boro at home. City are a team that according to a colleague are ‘scoring goals for fun’. He said this yesterday?

Everton folded against a Barcelona-like Chelsea, who won 5-0. My Dad, Mike Cronin (101st) was at the game and he said Chelsea were phenomenal, he hadn’t seen football of that quality for a very long time. Hazard (19) was the star of the show again and the highest scoring player of gameweek 11.

I’m sure someone up in Liverpool was similarly buzzing after ‘the pool’ whacked Watford by 6 goals to 1. The usual suspects were involved but Firmino (15) was the best scorer this time. Burnley enjoyed a high-scoring win of 3-2 to Palace, while I can’t help feeling that West Ham 1, Stoke 1 was about the most predictable score of the weekend. I suppose we could say the same about Arsenal and Tottenham’s 1-1 draw too, but I was secretly hoping for a 0-0.

So a nice shake up for the league table. Don’t tell any Liverpool fans but they are top of the league (only just). Anyone else remember when Liverpool nearly won the league a few years ago? Yes, they do too. To be fair I thought the Reds were pretty damned impressive on Sunday, and while I have 3 Liverpool mids in my team, I’m happy for them to continue this way (allowing that Chelsea continue to shine too).

Oh I actually forgot, United won, even Zlatan (12) remembered how to score, but this went completely under the radar as all the glory on Sunday afternoon was taken by Liverpool, but yes, Mourinho’s men beat strugglers Swansea 1-3 after a load of changes to both line ups. 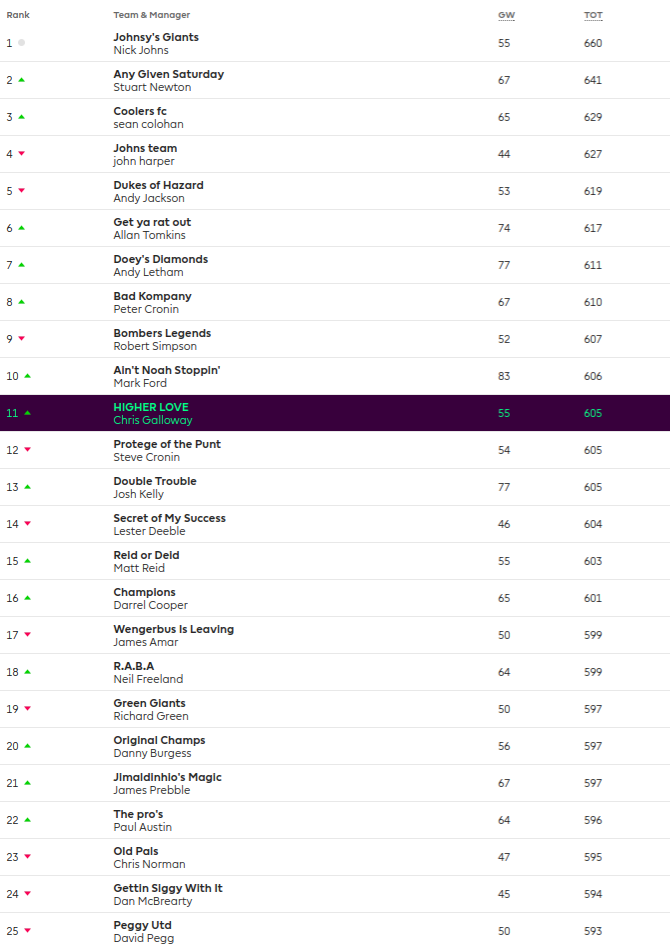 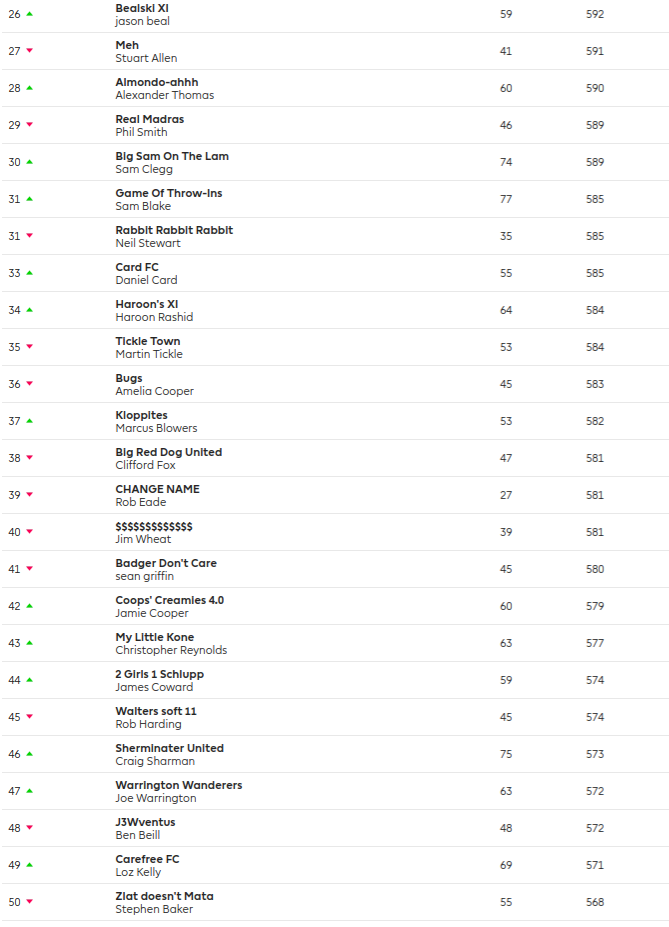 A quick note on Hazard (19); only 1 player in the Top 100 captained him, Vincent Kibler (65) who rose up the table this gameweek with 79 points. Vincent took a hit to bring Eden in too. Respect.

But in the Top 50 there was a whole lot of shaking going on. Highest score of the week was Mark Ford (10th) with 83 points, how many places in the league did he jump? Just the 30 places, from 40th in the league up to 10th. What a whopper. Mark benefited from some stellar performances,  a natty Mane (13) captain, Coutinho (11), Hazard (19), plus Costa (9) and Benteke (6) all contributed as well as an Azpilicueta (6) clean sheet too. Mark must have been gutted that Sterling and Gray not playing brought Jagielka (-1) off the bench. He could have had more!

Good weeks were also had by Andy Letham (7th) and Allan Tomkins (6th) who both entered the Top 10 with their scores of 77 and 74 points respectively. And Sam Blake (31st) had a pretty good week too, 77 points after a -8 point hit. Fair play Sam!

Josh Kelly (13th) was another 77 point scorer, as he continues to outshine one of last season’s prizewinners, his brother Loz (49th). Luck or judgement meant that Josh played George Friend (7) vs City, as well as earning points from a cast of Austin (7), Costa, Aguero, Firmino (15) and Hazard. Nice.

But as it was for these risers, so it was for some fallers. Jim Wheat (40th) dropped no less than 26 places in the league, but with a not devastating score of 39 points. Hmm. How did this happen? Well, hampered by injuries and in need of Aguero, Jim took a -8 hit to get rid of Walcott (2) and Valencia (0), meaning downgrades to Redmond (2) and Fuchs (1), with Costa (9) making way for Sergio (6) too. Ouch, I imagine that still stings a bit.

But it was far worse elsewhere.  Neil Stewart (31st) suffered a well below average week, with just 35 points. Neil, I promise, I don’t try and mention you every week, or are you doing this deliberately just to get mentioned? Neil had Coutinho and Aguero, but was let down by others. Shaqiri, Sterling, Lovren, and Amat all didn’t play, Williams (0) earned Neil nothing, and then as Lovren didn’t play, Britos (-2) came off the bench with some minus points. I imagine there was anger in the Stewart household Sunday afternoon. Still, Siggy (5) got an assist at least. It could have been worse. Happy face.

Finally, Rob Eade (39th), must be wondering what the hell is going on. Don’t worry Rob, I ask myself this question often too. Rob suffered an awful week with only 27 points, and this after a great score of 82 points in the last gameweek. Triple Everton of Williams (0), Bolasie (0) and Lukaku (2) was a punisher, 2 points between three of them, nothing for captain Sanchez (2), Andros Townsend’s goal (6) looking lonely in midfield. This caused a 31 place drop for Rob, underlining the unpredictably of this game we love. 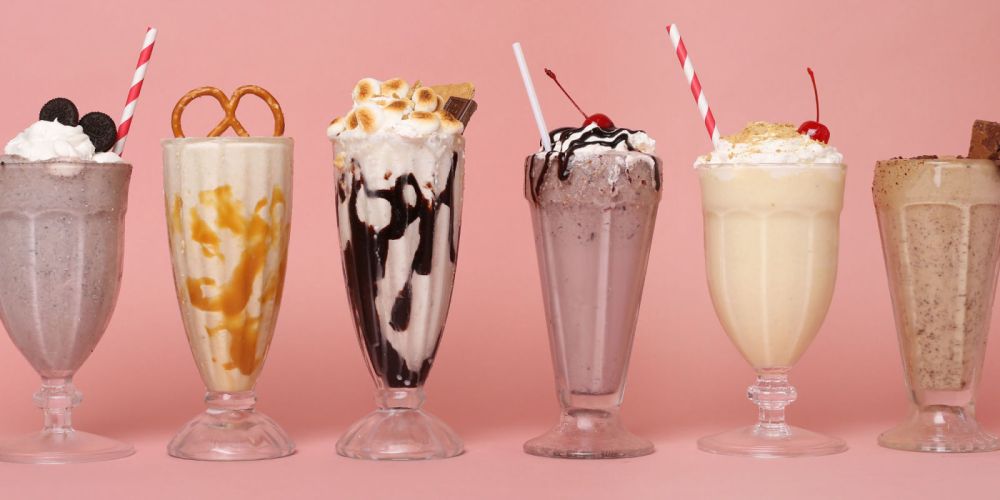 And that’s it for this week, but have you heard the news? The FFUK Cup live video draw is taking place this weekend. Check out if you have qualified here.

If not, do not despair, you should be in the Challenge Cup. Fixtures are already underway, if you don’t yet know who you are up against this month then check out the first round fixtures here. 1 gameweek down, 2 to go in November. All to play for.

Do you want to get involved with the next episode? We would love it if you would! If so, please get in touch with myself of Chris, priority goes to those in the league who have not been in a video before! Don’t worry, Chris and I will guide you through it very gently and we will send you the questions before so you have time to prepare your answers!